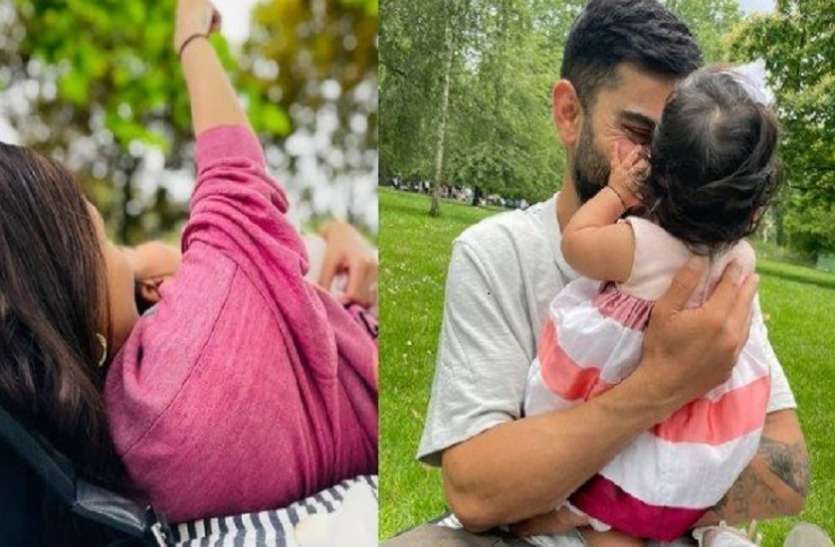 New Delhi. Bollywood actress Anushka Sharma and husband cricketer Virat Kohli are busy becoming parents these days. Ever since Anushka-Virat became parents, they have been seen enjoying their parenthood a lot. Often pictures of Anushka-Virat with baby girl Vamika come on social media, but always both are seen hiding the daughter from the media. Recently, the couple has posted some pictures on social media, spending beautiful moments with daughter Vamika. Which is going viral fast.

Anushka Sharma has posted some pictures on her official Instagram. In them, Anushka-Virat are seen having a lot of fun with their daughter. In a picture, Anushka is seen showing something to her daughter in her lap. On the other hand, in the second picture, Vamika is raised by father Virat Kohli in his lap.

In the third picture, the feet of Anushka and her daughter are visible. At the same time, in the fourth picture, the couple has shared a picture of a cake. Looking at these pictures, it seems that Virat, Anushka and their daughter had gone to a garden. Where he spent these beautiful moments.

Sharing the pictures, Anushka Sharma has written a heart touching caption for her daughter. Anushka writes that ‘A daughter’s smile has changed their lives. I hope that both of us can live up to that love, with the love that you look at us, little angel. Happy 6 months to all three of us. Let us tell you that on 11 February 2021, Anushka gave birth to her daughter.

Also read- Anushka Sharma wears necklace but not mangalsutra around her neck, a special person has gifted the actress

Talking about Anushka Sharma’s work front, Anushka is currently enjoying her motherhood. He has taken a break from his work for some time. Anushka had told that she now wants to spend more and more time with her daughter. Well, soon the film Kaala to be produced in Anushka Sharma’s production is about to come. In which Babil Khan, son of actor Irrfan Khan will be seen. Earlier, the film Bulbul was made in Anushka’s production house. Which was well liked.