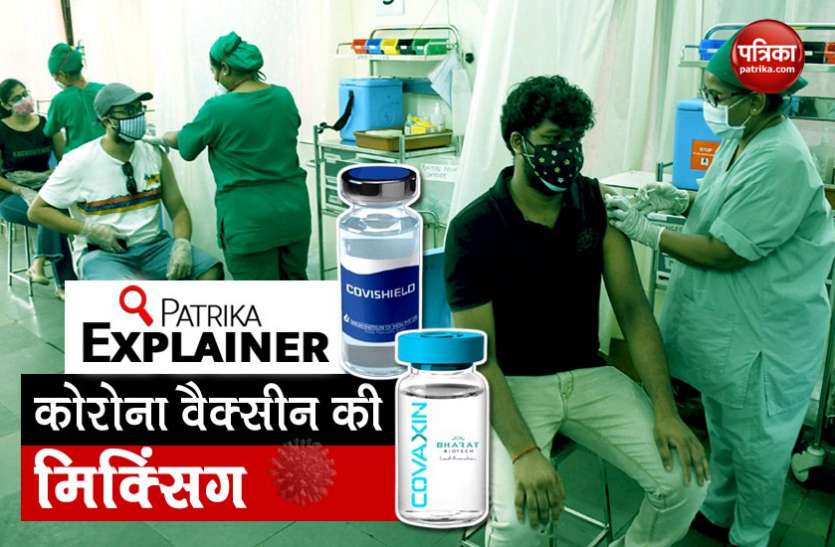 All about mix and match of Covid-19 vaccine

How helpful is the mix and match of corona vaccine in preventing the epidemic and what can be its side effects. Where in the world has it been recognized and where is it not. Know the whole thing.

New Delhi. German Chancellor Angela Merkel administered the Moderna vaccine as the second dose of the Kovid-19 vaccine after the first dose of the AstraZeneca vaccine. With this, the mix-and-match of Corona vaccine once again came into the limelight. Several clinical studies are underway regarding vaccine mixing to determine whether this process can boost immunity or make a difference in common post-vaccination symptoms. While there is still debate about the impact of the switching process amid a worldwide vaccine shortage, it is important to know the countries that have authorized mixing and how safe the process is and the science behind it. What is this.

What is meant by mixing dose?

Researchers hope that the immune response from mixing different vaccines will be stronger and longer than with both doses of the same vaccine. This method will better protect people from new variants coming in front of the corona virus.
Given the worldwide shortage of Kovid-19 vaccines, there are also concerns about the logistical aspect of delivering them. If the mix-and-match process is allowed, people can get the dosages that are available without any worries.

What are biological effects?

Scientists believe that since your immune system reacts to the virus’s spike protein, exposure to different parts of the spike protein should mean that your body will make a number of associated antibodies that can prevent future infections. In such a situation, all the antibodies should then provide better protection to the body and increase the likelihood that you will be protected from variants of the virus that change the spike protein.

The vaccines from Pfizer and Moderna are made from a small portion of mRNA, which is a genetic material that contains the recipe for making a region of the SARS-CoV-2 spike protein. This mRNA particle, wrapped in a thick coat, moves into a vaccinated person’s cells where it directs the production of viral proteins.

The person’s immune system then detects any foreign spike protein and produces antibodies against it. Many other COVID-19 vaccines rely on a viral vector. In these cases, the researchers modified an adenovirus that usually causes the common cold-cough to carry DNA instructions to produce a portion of the SARS-CoV-2 spike protein. This modified virus is safe because it cannot replicate in people.

So far, limited data suggests that the dose of AstraZeneca is safe and effective after the first Pfizer vaccine. This mix comes with a slightly higher chance of temporary side effects like pain and chills.

What are the concerns?

International entities such as the Coalition for Epidemic Preparedness Innovation, which is looking at mixing and matching COVID-19 vaccines, have uncovered some of the complexities. These include differences in the shelf life of these vaccines, their shipment and storage conditions, and some contraindications – such as some vaccines may have more side effects or may not work in people with specific diseases.

Studies such as the Com-COV trials suggest that some mix and match with Pfizer vaccines, such as AstraZeneca, may increase side effects.

What do scientists say?

As governments and pharma companies around the world prepare to introduce boosters targeting more infectious virus variants, Dr. Soumya Swaminathan, Chief Scientist at the World Health Organization (WHO), has said that immunization or heterologous vaccines can be used using combinations of vaccines. Prime-boost vaccination can be a big help to countries.

According to WHO, heterologous prime-boost vaccination consists of two different vectors or delivery systems expressing the same or overlapping antigenic insert.

Swaminathan said during a recent interview, “This method of heterologous prime-boost is working well. It opens up opportunities for countries that have vaccinated people with a vaccine and now they are likely to stock up.” Looking forward to the second dose when finished, who want to be able to potentially use a different vaccine.”

Paul Offit, director of the Vaccine Education Center at Children’s Hospital of Philadelphia, said that using the vaccine combination is more likely to cause long-term immunity or fewer side effects in some individuals. He also said that the basic requirement of a vaccine is to prevent hospitalisation, prevent ICU admission and prevent death.

What is the global situation?

According to clinical trial registration data, Chinese researchers were testing a mix of COVID-19 vaccine doses developed by CanSino Biologics and a unit of Chongqing Zhifei Biological Products in April. Canada will recommend combining the first dose of AstraZeneca vaccine with the second dose of Pfizer or Moderna vaccine.

France’s top health advisor recommended in April that people under the age of 55 be given an injection of AstraZeneca first, then a second dose of the mRNA vaccine, although the trials have not yet evaluated dose-mixing. is. Russia halted the country’s clinical trials of a combination of AstraZeneca and Sputnik V vaccines after the Health Ministry’s ethics committee requested more data.

South Korea said it would run mix-and-match trials with AstraZeneca doses developed by Pfizer and other drugmakers. The United Arab Emirates and Bahrain have made available the Pfizer/BioNtech PFEN, BNTX.O Corona Virus Vaccine as a booster shot, following the vaccine initially developed by the China National Pharmaceutical Group (Sinopharm).

Britain said in January that it would allow people to have a different vaccine for a second dose on extremely rare occasions, for example if the first vaccine is not in stock. The first findings from an Oxford University-led study, released on May 12, found that those who took the mix and match vaccine were more likely to report mild or moderate symptoms after the vaccine than those who received the routine vaccination.

In January the US Centers for Disease Control and Prevention (CDC) updated its guidance to allow mixing of vaccines from Pfizer/BioNtech and Moderna with an interval of at least 28 days between two shots and in “exceptional situations”. given in.

Have vaccines been mixed in the past?

Mix and match vaccines have been tested for decades, especially for viruses such as Ebola. However, most combinations were initially restricted to vaccines using the same technology. In India, combinations of rotavirus vaccines have also been used and tested.