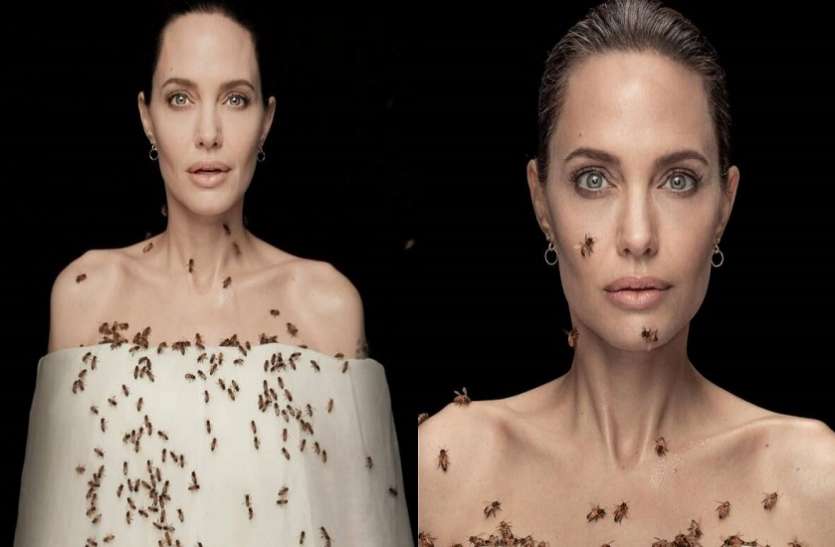 Angelina Jolie did a dangerous photoshoot, bees stuck to her body for 18 minutes

New Delhi. Hollywood actress Angelina Jolie is popular all over the world. Millions of people are crazy about her beauty and films. Along with this, Angelina is also known for social work. But this time Angelina has come into the limelight due to one of her photoshoots. This photoshoot of her is currently a topic of discussion on social media. In this photoshoot, she was wrapped in bees for 18 minutes. During this, not even a single wrinkle came on his face.

40 year old technology used
Actually, Angelina Jolie has got this photoshoot done for National Geographic magazine. The purpose of this photoshoot was to encourage beekeeping on World Bee Day. In the pictures going viral on social media, Jelina is seen in an off-shoulder white dress in a black background. She is looking towards the camera. His body is covered with bees. But even during this time the courage on his face is worth seeing. This photoshoot of Angelina has been done by famous photographer Dan Winters. He told that he used 40 years old technique for this photoshoot.

Italian bees were used
This photoshoot of Angelina was done in collaboration with National Geographic. Bees were stuck on his body for 18 minutes. Dan Winters said that Angelina’s safety was taken care of during this photoshoot. This photoshoot was done with a lot of planning. The photographer who shot the photo said that Italian bees were used for this shoot, which were calm during the shoot. The shooting area had to be kept quiet and dark so that the bees remained calm. The pheromones were applied to the parts of Angelina’s body where the bees were to be attracted. Except for the actress, the shooting crew was wearing a protective kit.