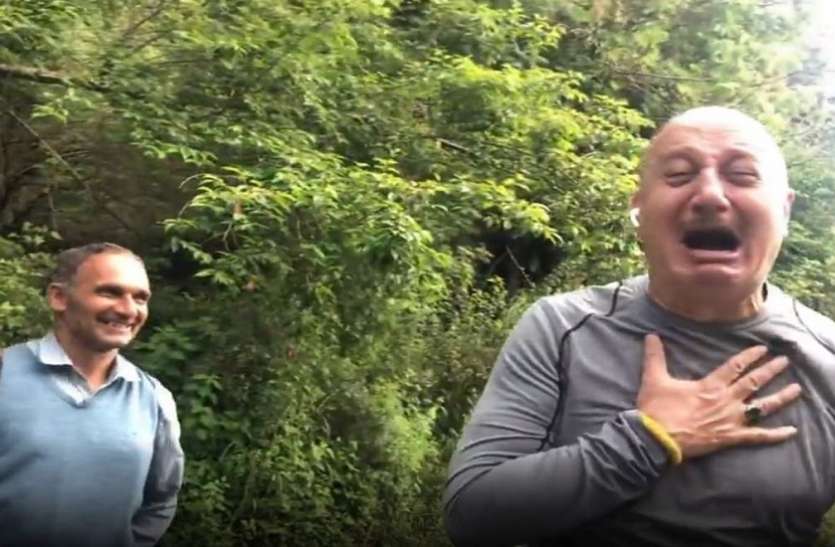 anupam kher shared video from himachal man did not recognize him

New Delhi. Actor Anupam Kher is one of the veteran actors of Bollywood. He has made a place in the hearts of people with his acting. He has appeared in about 518 films till now. He has also done serious to comedy characters. In such a situation, he has a strong fan following. He is popular not only in the country but all over the world. But now such an incident has happened with Anupam Kher due to which he feels like drowning in full water.

In fact, not one person could recognize him. These days Anupam Kher is in Himachal Pradesh. In such a situation, recently he went out for a walk in the morning. During this, a person could not recognize him. Anupam Kher is making his own video. Then he asks a person his name. In response to which he reveals his name as Gyanchand. After this Anupam Kher asks if he goes to his work every day on foot. After this, while talking, Anupam asks the person if he recognizes him. In response, the person says no.

I always proudly say that I have done 518 films. And I will assume that at least in our India everyone must be recognizing me. But Gyanchand ji, near the hill near Shimla, cleared this misconception of mine. That too with so much innocence! Look and laugh out loud.😂 pic.twitter.com/tK3uxHuUm2

After this, the actor took off the mask on his face and then he asks that if you recognize it now, the person says that Sir do not remember your name. On not being recognized by Gyanchand, Anupam Kher says in a funny way that at this time I can drown in full water. Anupam Kher has shared this video on social media.

Sharing the video, Anupam Kher writes, ‘I always proudly say that I have done 518 films and I assume that at least in our India everyone must have recognized me. But Gyanchand ji, near the hill near Shimla, cleared this misconception of mine. That too with so much innocence! They didn’t know who I was. It was hilariously heartwarming and yet beautifully refreshing! Thank you my friend for helping me keep my feet on the ground!’. This video shared by Anupam Kher is now becoming quite viral on social media.