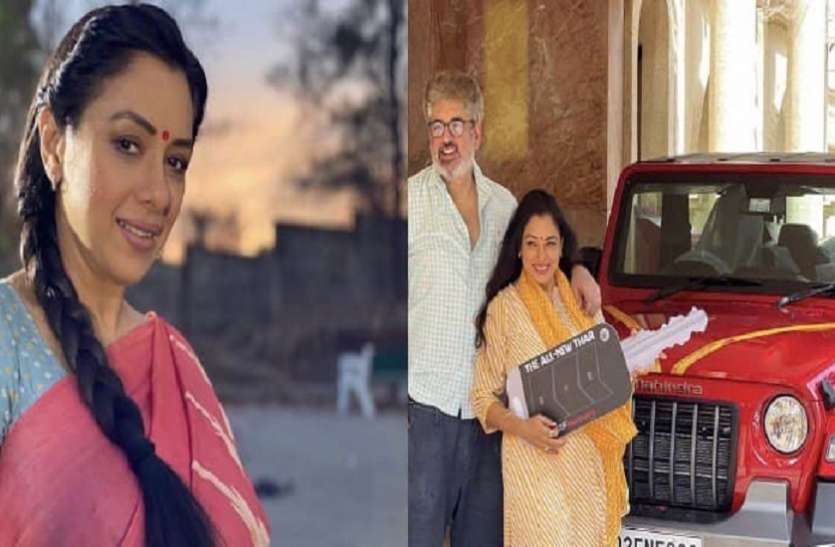 New Delhi. Rupali Ganguly, the lead actress of TV’s most popular show ‘Anupama’, is getting a lot of praise these days due to her superb acting. Rupali entertains her fans a lot on social media. In such a situation, she tries to keep herself happy too. This is the reason why the actress has given herself a special and big gift. Rupali Ganguly has gifted herself Thar after achieving a lot of success. The information of which he has posted a picture on social media.

Actually, Rupali Ganguly has posted a picture on social media. In which she is seen standing with her husband Ashwin Verma. Rupali’s brand new vehicle Thar is also visible in the photo. Rupali has bought Mahindra’s new Thar. Whose big key Rupali is seen smiling with in her hands. His fans are congratulating him for buying Rupali’s new car. The special thing is that this picture of Rupali is also becoming increasingly viral on social media.

Also read- Rupali Ganguly of ‘Anupama’ fame was a victim of body shaming, neighbors used to call her ‘Aunty’

The caption of the actress won the hearts of the people

Along with Rupali’s picture, people are also very fond of her caption. Sharing the photo with the new car Thar, Rupali wrote in the caption that ‘Long and short! Be Indian Buy Indian. Support Indian. #ProudIndian.’ Seeing Rupali’s sense of pride in being an Indian, her fans have started loving her more. Everyone is praising him fiercely by commenting in his comment box.

Talking about Anupama Show, it has become a very popular show in every household. Recently, actor Mithun Chakraborty also came on the sets of Anupama. Many pictures of Mithun Chakraborty with the team had become viral on social media. Let us tell you that actress Madalsa Sharma, who plays Kavya in the show, is the daughter-in-law of Mithun Chakraborty. Coming on the sets, the actor also praised the show. At the same time, while praising Rupali’s acting, he said that he often weeps after seeing his acting.