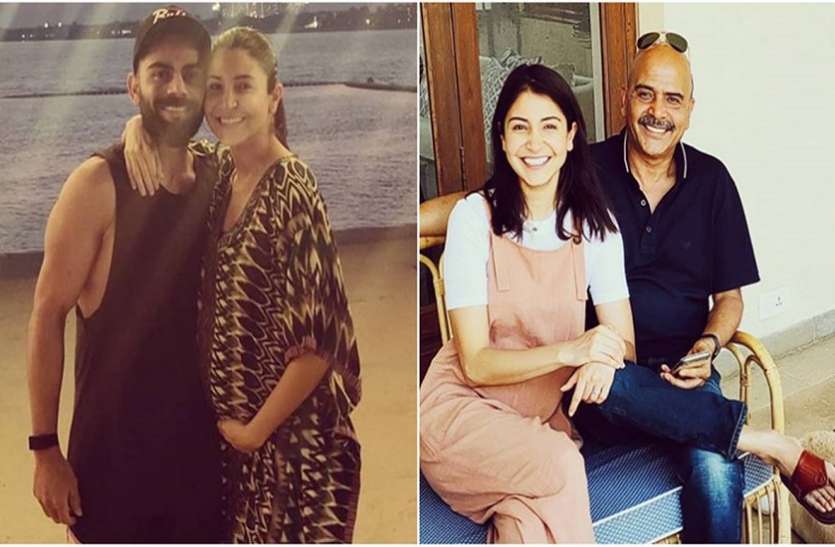 New Delhi. Father’s Day is celebrated all over the world on 20 June every year. Today everyone expresses love and respect towards their father. Also, he tells how important his father is in his life. Everyone from mango to special is writing a very special message on social media for their father on this day. Many Bollywood celebs have also celebrated this day in their own style. At the same time, actress Anushka Sharma has written a very special note for her father and Virat Kohli.

Anushka shared unseen photo
Anushka Sharma has shared some pictures from her Instagram account. In the first picture, she is seen laughing with her father. In the second photo, she is with Virat Kohli. Both are posing looking at the camera on the beach. This picture was taken during the pregnancy of Anushka. Because her baby bump is visible in the photo. At the same time, in the third picture, Anushka’s father and Virat Kohli are together. Both are posing in a very cool style. This clearly shows that there is a strong bond between the two.

Anushka wrote a special note
Sharing these pictures, Anushka wrote in the caption, “Two most exemplary men. Two who understood me well. Full of immense love and grace. The best father a daughter can have. Happy Father’s Day.” This post of Anushka Sharma is now becoming quite viral on social media. So far more than 13 lakh likes have come on his post. Also, fans are giving different types of reactions by commenting. Let us tell you that these days Virat Kohli is captaining Team India in the final of the World Test Championship against New Zealand in Southampton. In such a situation, Anushka is also present there with him.

READ Also  Anushka Sharma and Virat Kohli were seen dancing in the streets of England, the actress posed for a special fan

Also read: Shahid Kapoor and these stars have a relationship with their stepfather

Special message for Vamika and Anushka
Earlier this year, the little angel has stepped into the house of Virat Kohli and Anushka Sharma. Anushka gave birth to daughter Vamika in January. In such a situation, for Vamika, Virat wrote, “Watching the birth of a child is the most spine chilling, unbelievable and wonderful experience for a human being. After watching this you can see the true strength and divinity of women. and also why God has created life in them. It is because they are much stronger than us men.” This message was written by Virat on Women’s Day.