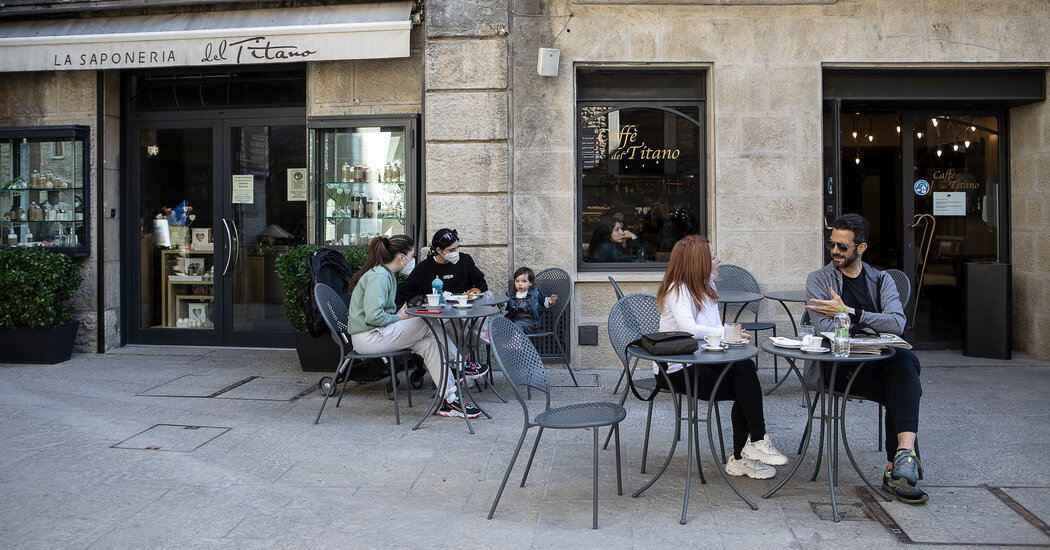 At the troubled start of the vaccine rollout in Europe, the Republic of San Marino found itself running out of promised doses and turned to Russia for help. The tiny city-state, surrounded on all sides by Italy, quickly vaccinated most of its population with the Sputnik V vaccine, reaching levels of immunity that were the envy of the largest European nations.

But in a twist of fortune, the same Sputnik vaccines that freed San Marino residents from the virus can now trap them within its narrow borders. Italy is preparing to introduce a vaccine passport for many social activities that will only recognize vaccines approved by European health authorities. With Sputnik V not on the list, San Marino is out of luck.

“We’re stuck here,” said Donata Bucci, 57, a salesperson at a bridal shop in San Marino, who received the Sputnik V vaccine and refused to book a vacation at a Tuscan farmhouse due to the new requirements. “We feel discriminated against.

The isolation of San Marino has become a stark glimpse of the potential tensions that new passports and vaccine requirements could create in Europe, as millions of travelers who have received vaccines that have not been approved by European regulators could turn away. see ban from engaging in social activities.

From Friday, Italy will require proof of vaccination with vaccines manufactured by Pfizer, Moderna, AstraZeneca or Johnson & Johnson to dine indoors in restaurants and bars, or to go to concerts and museums. Those who have recovered from Covid or have had a recent negative swab will also be allowed entry. The authorities said they could extend the requirement to an even wider range of activities.

San Marino, 140 miles north of Rome, is not part of the European Union, but the lives of its 30,000 inhabitants have always been closely linked with Italy – before the pandemic made this porous border palpable .

Its inhabitants and those of the neighboring northern region of Emilia-Romagna speak the same Italian dialect, eat the same tagliatelle, and share workplaces, schools and days at the beach on the Riviera. Its medieval ramparts, picturesque alleys and duty-free shops also attract many foreign tourists visiting the Italian coast.

San Marino Health Minister Roberto Ciavatta said he was concerned that as the health pass becomes an increasingly essential part of Italy’s social activities, life is much more difficult for many Sammarinese who cross the border regularly.

On Wednesday, Ciavatta visited Rome in the hope of convincing the Italian authorities to release the Sammarines through a bilateral agreement. In a telephone interview from his car, Mr Ciavatta said he did not see why the widely vaccinated San Marino – 70 percent of the population received two injections – should be treated as a “vax-free country” with its inhabitants required to take a tampon before each cappuccino.

A peer-reviewed article in The Lancet rated the effectiveness of the Sputnik vaccine at 91.6%, but Russia has repeatedly failed to provide the data requested by foreign drug regulators to approve the vaccine.

Italy has so far failed to recognize Sputnik V vaccinations as meeting the requirement to obtain its health pass, known as the “green pass,” meaning those who have received the vaccine should still show proof of a negative test.

Diplomatic tensions emerged last year when San Marino offered dinners as Italians faced strict lockdown restrictions. Then, as the independent nation received the Sputnik vaccines and achieved higher vaccination rates than Italy, it refused the Italian intruders who also wanted to be vaccinated.

Italy had promised that it would include San Marino in the delivery of doses which was negotiated at the European Union level, but Mr Ciavatta said San Marino had not received any doses in the first two months of the Italian vaccination campaign as Europe struggled with shortages.

As Covid patients filled hospital beds in San Marino, which once had one of the highest Covid death rates in the world, the small state decided to find a solution on its own and bought doses to Russia, with which he maintains close ties.

Carlotta Porcellini, 30, owner of an ice cream shop in San Marino, said she would reluctantly spend the summer on the quiet stone streets of the city-state instead of undergoing tests to get to in the picturesque seaside town of Rimini.

“It’s absurd – we are all vaccinated,” said Ms Porcellini, “but we have to stay in our little reality.”