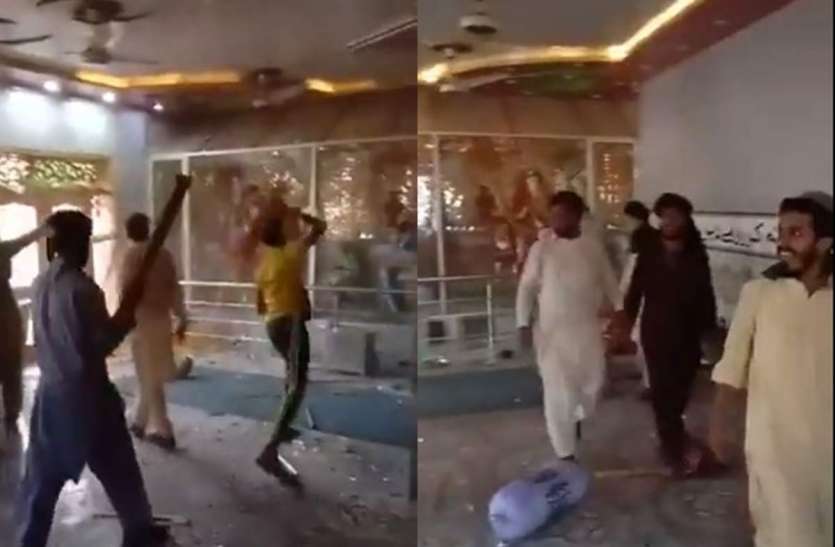 New Delhi. In the Punjab region of Pakistan, fundamentalists have once again vandalized a Hindu temple. The fundamentalists who arrived with sticks and sticks attacked Siddhi Vinayak Temple. Many videos of this cowardly attack were also made which are going viral.

In these videos, a mob of fundamentalists can be seen vandalizing the temple. This incident is being told of Bhong town near Rahim Yar Khan in Punjab, Pakistan.

Once again a Hindu temple has been targeted in Pakistan. A Ganesh temple in Bhong Sharif village of Sadiqabad district of Punjab province was vandalized on Wednesday evening.

rampant uproar
In the video going viral on social media, it can be seen that miscreants suddenly enter the temple with sticks and start vandalizing.

The uncontrollable mob even broke the glass in the temple. The idols of gods and goddesses were kept behind these mirrors.
Not only this, the miscreants damaged many parts of the temple.

no arrests so far
The special thing is that after this cowardly act of miscreants, police force was deployed on a large scale in the area. Investigation has also started in the matter, but no arrest has been made so far.

The leader of Imran’s party said this
Jai Kumar Dhirani, leader of Imran Khan’s party PTI and patron of Yuva Hindu Panchayat Pakistan, strongly condemned the incident. He gave his response by tweeting. He wrote that, strongly condemn this dastardly attack on the temple in Bhong Sharif of the district. This attack is a conspiracy against beloved Pakistan. I request the authorities to put the culprits behind the bars.

Imran’s assistant said – the guilty will not be spared
Dr. Shahbaz Gill, Special Assistant to PM Imran Khan, described the incident as sad and unfortunate. The Prime Minister’s Office took cognizance of this untoward incident and ordered the district administration to investigate the matter.

He said, we want to assure the people that strict action will be taken against the culprits. The Pakistani constitution provides freedom and protection to minorities to perform their worship freely.

appealed to the Supreme Court
At the same time, the disgruntled minority community has now urged the Chief Justice of the Supreme Court to intervene. Dr Ramesh Wankani, President of the Hindu Parishad of Pakistan, told that this Hindu temple is located in Bhong town of Rahimyar Khan district of Punjab province, which has been attacked by extremists. He said the situation in the area had turned tense on Wednesday.

cases increased in lockdown
In December last year, a Hindu temple was torched after a mob of over a hundred people vandalized it in Khyber Pakhtunkhwa province. The incident took place in Teri village of Karak district. At the same time, there has been a lot of conversion of Hindu and Christian girls during the lockdown. Pakistani human rights activists have expressed concern that due to this the feeling of insecurity has also increased rapidly in the minds of minorities.

Click to rate this post!
[Total: Average: ]
READ Also  Without Barry the Central Park Owl, What Will We Do?