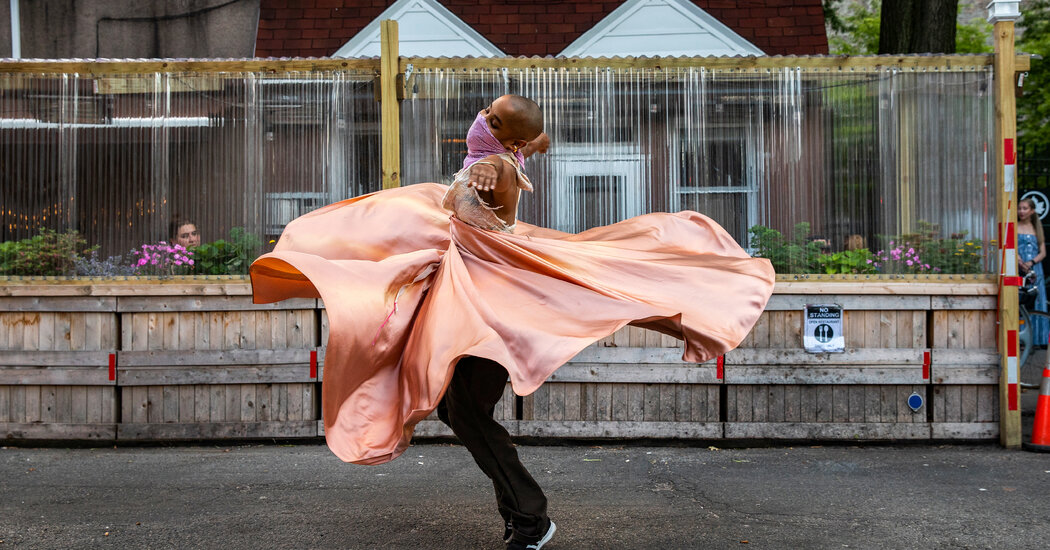 Aunts Is Back, Turning City Blocks Into Dance Floors

It wasn’t just that the barricades were pink, it was the shade of pink: incredibly vibrant, unabashedly cheerful. On a scorching evening in June, these barricades were placed at either end of a block in Long Island City, not only to stop traffic, but to mark territory. During the following hours, it was an area reserved for aunts. And while it can be hard to describe exactly what aunts is – it is not an institution with a home base – it is easy to say what it creates: a space for the dance to occur.

On June 6, the aunts emerged from the pandemic with a new set of organizers and Aunts Goes Public !, the first of three summer events featured as part of Open Culture NYC, in which dance artists take control of a block. In typical aunt fashion, the performances bleed from one to the other, turning a long street into a sensory landscape of movement and sound. Kirsten Michelle Schnittker and Tara Sheena, scurrying out onto the sidewalk, echoed the swirling jumps and twists in a meditative, architectural arrangement that held their bodies in space – firmly, delicately.

Chloë Engel, limber in red pants, was everywhere – her body swirling or still as she stopped near a fence along the perimeter of a park. Jasmine Hearn, draped in a sculptural fabric, was lost in her own world, seemingly evoking the spirits on the sidewalk. Later, Symara Johnson, with golden tinsel on her ankles and wrists, waved an arm back and forth sending golden sparkles. These performances, and several others, came in waves. Watching them was a bit like being pulled and pushed by the water yourself.

The next takeover of the aunts will be at 5:30 p.m. on Sunday at South Oxford Street, between Fulton Street and Lafayette Avenue, Brooklyn. The third will take place on September 19. (An additional performance of Aunts, in October, will be a collaboration with the NYU Skirball Center for the Performing Arts and the Chocolate Factory Theater.) Each event, which ends with a dance party, features around a dozen performers, as well as a DJ and a barricade artist. Because Open Culture NYC attendees have to acquire their own barricades to block the street, the aunts decided to turn that into art, too. Jonathan Allen created them for the first event; for Sunday, Malcolm-x Betts will do the honors.

What to expect on Sunday? I like to think of aunts as a traveling adventure through performance and space. Beyond several performers – including Alexandra Albrecht, Rena Anakwe, Edie Nightcrawler and Ambika Raina – it’s unpredictable, a setting for overlapping performances and multidisciplinary work. An aunts event is a place to try something out or to show off a finished work. It’s malleable and run by artists, open and non-judgmental.

“It’s a chance to try things out with a live audience and see what works and what doesn’t,” said Laurie Berg, a longtime organizer of Aunts. “It’s like, ‘Did you just think about it when you came into the metro? ” It’s awesome. It’s good.”

Over the years, Aunts’ events have taken place on beaches, in museums and in lofts. There is no time limit for a performance; artists can rehearse their pieces at an event, which lasts about two and a half hours, or perform only once. For the audience, it’s a different way of experiencing a show: you can get close to the dance or watch it from a distance. You choose where to look.

Formed in 2005 by Jmy James Kidd and Rebecca Brooks – although there have always been many participating organizers – Aunts was taken over by Berg and Liliana Dirks-Goodman in 2009. When Dirks-Goodman left New York for Philadelphia, Berg decided it was time to open up the aunts to a new generation of organizers. There are now six with Berg: Shana Crawford, Kadie Henderson, Jordan D. Lloyd, Larissa Velez-Jackson and Jessie Young.

“To me, the definition of conservative is custodian as opposed to taste maker,” Berg said. “I am a keeper for the aunts. I am a host and an organizer. But I don’t want to be a keeper.

“If it ends up being really different from what it looked like when I started,” she added, “that’s good because it can’t stay the same.”

Velez-Jackson, a choreographer and interdisciplinary artist with a solid foundation in improvisation, said much of his work began at Aunts Events. Her first performance at One was in September 2006. “Working live through improv material in front of an audience is really where the research would take place,” Velez-Jackson said. “It’s when you’re in front of live people that it’s a lot more real – you get better.”

And for many months, these experiences were rare. At a time when so many performance opportunities have been lost due to the pandemic, aunts have a new relevance as choreographers to return to working in public. As Young put it, “It’s a form of organization that changes shape and can seep and sink into spaces and challenge growth from within.”

And it is a role model – nourishing but free – in which she believes. What strikes Henderson about Aunts is the way he takes care of his artists. (On the one hand, they get paid and will be paid even if the event is canceled due to rain; they will also have the option to perform at the September event if the July one is canceled.) movement and a vocal improviser who has a non-profit background, she was new to Aunts, but quickly recognized that this would be “a great opportunity for me to expand the care I usually provide,” he said. she stated, “with that extra layer of, I can Choose the artists I deal with.

Henderson’s concerns were that she “didn’t want to be at another dance event and be the only black girl there” or “another dance event where we all do the same PoMo moves,” he said. she said, referring to postmodern dance, “with serious faces in those Dansko shoes and funky gauchos.”

“It’s not my ministry,” she said. “And I was a little nervous talking about it, but they were really cool. They were like, ‘Kadie, we to have this.'”

With six organizers recommending artists to perform at events, Aunts reflects something else in this moment of contemporary dance: multiple and varied artistic voices both backstage and on stage. “Can you have a sound performer next to a movement performer next to someone from hip-hop? Lloyd said. “I was stimulated by a wide range of voices doing all different types of things and how that could create an exciting experience. “

For Henderson, this collective energy builds artistic abundance. In Queens, she was even forced to stand behind the microphone and sing. “To be a part of something that has brought comfort and to be able to create a space that I found myself in – of course, I’m going to be moved to sing,” she said. “I wanna tap into that tank of, like, damn, we did!” And so many people haven’t. It’s my way of showing my gratitude.

Being involved with aunts is also the fun it brings. Crawford, a dancer, also works at the Chocolate Factory Theater and was the production manager for the recent River to River Festival. She is busy. But aunts, for her, are worth it – and it’s all in the name. Aunts “have this loving, hugging support that’s going to help you grow, that’s going to give you an experience, but it’s not like your mother,” she said. “And it’s not like your child. It’s that family member who’s there to let you do your thing.

And, for now, the aunts have spread this philosophy in the streets, not only for the artists but also for the public; in many ways, they move as one. As the outdoor venues disappear, the street is different, said Young, of a park, where during the pandemic, she and many dancers spent hours crafting choreography and taking lessons. “There’s something about the friction, the structure, the concrete, the energy of a road that’s been blocked,” she said. “It’s even more siphoned off the energy: it’s like an artery that is contained for art.”