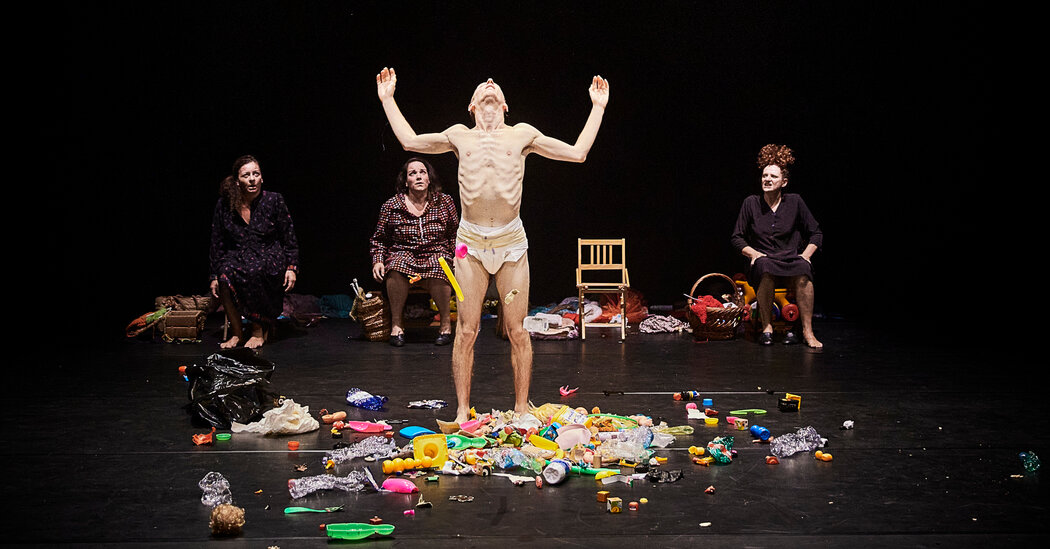 AVIGNON, France – It sounds like a virologist’s nightmare: 1,070 theatrical productions; 116 places, most of them in the cramped medieval center of Avignon; and everywhere, festival-goers seated side by side in indoor spaces.

Still, the Fringe offer at the Avignon Festival this summer – which runs alongside the main event and is known as ‘the Off’ – has grown, even as the most contagious Delta variant of the coronavirus has become the dominant strain in France.

Is it problematic to enjoy excellent performance under the circumstances? With the Avignon rituals, including unmasked artists handing out advertising flyers on the street, came a sense of normalcy. Still, a sly sense of guilt permeated conversations with theatergoers – especially when new restrictions were announced, shortly after the start of the Festival d’Avignon.

Last week, the French government decreed that a “sanitary pass” – a QR code proving full vaccination or a negative coronavirus test result – would be required from July 21 for all sites with more than 50 places. Restaurants, bars and trains will follow from August 1. (The health card requirement previously only applied to events with over 1,000 spectators.)

Frustration was palpable in Avignon before the rule came into force. While about half of the Fringe sites are small enough to bypass it, some companies have chosen to leave earlier, and larger shows have reported ticket returns and a drop in bookings. Last weekend, as large protests against the policy swept through France, demonstrators filled Avignon’s largest avenue, shouting “Freedom! (“Freedom!”)

While the official programming of the Festival d’Avignon (“the In” in local jargon) has shifted from gloomy to gloomy in its themes, the Fringe fare offered at least a respite from pandemic concerns, as the comedy has always been an important part of this less scholarly part of the festival.

Two original one-man shows, by Mehdi-Emmanuel Djaadi and Marc Arnaud, combine jokes and impressions with the exploration of deep inner conflicts. Djaadi’s “Coming Out”, in particular, is an exercise in breaking down stereotypes. The coming-out in question is religious: the show tells the story of the 34-year-old comedian’s conversion from Islam to Catholicism.

Support of his choice is scarce, as Djaadi tells it at the aptly named Théâtre des Corps Saints. His family, of Algerian origin, felt that he was turning his back on them; a priest explained that he didn’t want any trouble; in artistic circles, many were uncomfortable with what they saw as the homophobia and conservatism of the Catholic Church.

Yet instead of expressing the resentment he might have felt, Djaadi looks back on his journey, from teenage rebellion and drug trafficking to a Catholic wedding, with amused affection. He points out the contradictions on both sides, and the devotees of France are also drawn to sharp satire.

In “The metamorphosis of the storks”, Arnaud focuses on a much shorter period of time. He and his wife have gone through the process of in vitro fertilization, and we meet Arnaud as he is about to donate a sperm sample – a process that elicits far more feelings than he does. would have imagined.

As he blocks impatient hospital staff, his monologue covers his sex education, attempts at therapy, and anxiety about parenthood. It is a quick and honest calculation with the setbacks of masculinity, which filled the Théâtre du Train Bleu to the brim (before the health passport obligation was put in place).

Not that the Avignon public was put off by darker shows. At Artéphile, one of the few Fringe venues to also function as a year-round cultural space, director Blandine Pélissier has proposed an austere and convincing production, “Iphigénie à Splott”.

Welsh playwright Gary Owen is relatively unknown in France, but his 2015 revamp of the myth of Iphigenia – translated by Pélissier and Kelly Rivière – should spark curiosity for his work. Here, the sacrificial victim is Effie, from the Cardiff neighborhood of Splott, a raging surge of energy who unexpectedly gets pregnant. This 90-minute monologue convincingly attributes the lack of support she faces to cuts to social and medical services, and actress Morgane Peters takes on the role of harsh anger at pain with poignant ease.

Productions with larger casts were a bigger challenge this year, given that a positive coronavirus test in the company was enough to cancel a show, and director and actress Julie Timmerman downsized her show “A Democrat ” Consequently. Timmerman revamped this excellent production on Edward Bernays, Freud’s American nephew known as “the father of public relations”, for just two actors (Mathieu Desfemmes and herself). The result is deftly written and witty, a dignified look at the dangers of Bernays techniques when used for propaganda purposes.

While the official and organized programming of the Festival d’Avignon includes far fewer productions than the Fringe, it has been hit by a handful of cancellations linked to the coronavirus. The artistic teams of two choreographers, Dada Masilo and Dimitris Papaioannou, were unable to make it to Avignon, while Eva Doumbia’s “Autophagies” saw its course interrupted when members of the cast and team had to self-isolate after coming into contact with an infected person. .

Two European productions which have seen the light of day make an impression. Emma Dante, from Italy, choreographs as much as she directs, and in “Misericordia”, theater becomes dance and vice versa. In it, three women are raising a child, Arturo, who is described as mentally disabled and whose mother has suffered domestic violence. Together, they form a quarrelsome and complex family. Dancer Simone Zambelli not only captures Arturo’s trembling and disjointed body, he transforms his physical vulnerability and moments of joy into poetry, knotting into expressive forms.

Avignon also hosted the stage version of “Pieces of a Woman”. Before it became a movie with Vanessa Kirby last year, playwright Kata Weber and director Kornel Mundruczo imagined it for the TR Warszawa performance hall in Warsaw, and the Polish cast delivered a hit. fist in Avignon at the Lycée Théodore Aubanel.

The play begins with the same long working scene as the film, but it covers less narrative ground after the central couple’s baby is stillborn. While the on-screen version details the trial of a midwife who attended the birth, this is only hinted at as a possibility on stage, and Maja, who lost her child, refuses to go. until the end. Instead, the characters’ grief unfolds over a long family dinner at Maja’s mother’s house.

The result demands more patience from viewers, but rewards it with a fully formed portrayal of a drifting family. In this sense, the stage version of “Pieces of a Woman” completes the puzzle of Weber and Mundruczo: let’s hope that Avignon will not be its only international stopover.