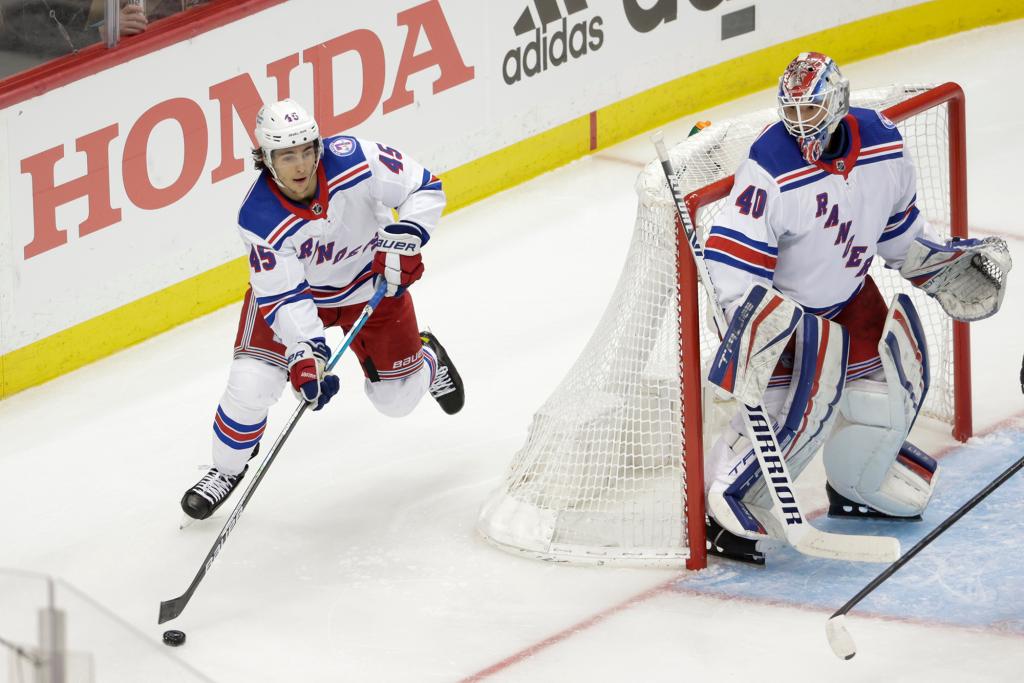 Facing defensive-zone pressure from Brian Boyle, Schneider turned the puck over and seconds later, Evan Rodrigues put it in the back of the net, extending the Penguins’ lead to 4-1 and deepening the spiral in which the Rangers had found themselves during a disastrous 20 minutes.

Justin Braun, who has more playoff games under his belt than any other Ranger, used words like “stressful” and “blur” to describe his playoff debut with the 2011 Sharks to reporters Sunday. Doubtless, in time, the 20-year-old Schneider will describe this series in similar terms.

“Awesome player,” Braun said of Schneider. “Got a bright future. Strong, skates well, shoots the puck really well. Yeah, he’s been really impressive. I didn’t know much about him coming in and he’s a very impressive kid.”

Even with the costly error Saturday, Braun has let Schneider know he belongs on the postseason stage.

“There’s no reason to get overly stressed, cause they can play at this level,” Braun said. “They’re good. Even talking to Schneidsy last night — don’t worry about it, man. Just keep going. You’re gonna get your chance, get a couple goals in this series.”

Post Sports+ members, sign up to have Mollie Walker text you the latest word on the Rangers and reply with your thoughts and questions. Not a Sports+ member yet? Try it now.

Schneider did pick up an assist in Game 2, but the Rangers’ top two defensive pairings have gotten the bulk of the ice time. The rookie played just 13:47 in Game 3, which the Rangers lost 7-4.

Keep up with the most important sports news

Sign up for Starting Lineup for the biggest stories.

Rangers coach Gerard Gallant, asked Sunday about his options regarding the third pair, said he was confident to stick with Schneider and Patrik Nemeth.

“You’re pointing the finger at those guys, but it was the first period. I got no problem,” Gallant said. “They’re gonna play hard. They’re gonna do the best they can. We’re all about our team.”

If Ryan Lindgren is able to return to the lineup, though, Gallant will soon have a decision on his hands with two spots to split among Braun, Schneider and Nemeth.

Braun, who can play on either side, has filled in for Lindgren on Adam Fox’s left in the last two games after sitting in the series opener.

“You try and put the best lineup out there to win hockey games,” Gallant said. “Last night we had a tough night. Not just our third D-pair.”