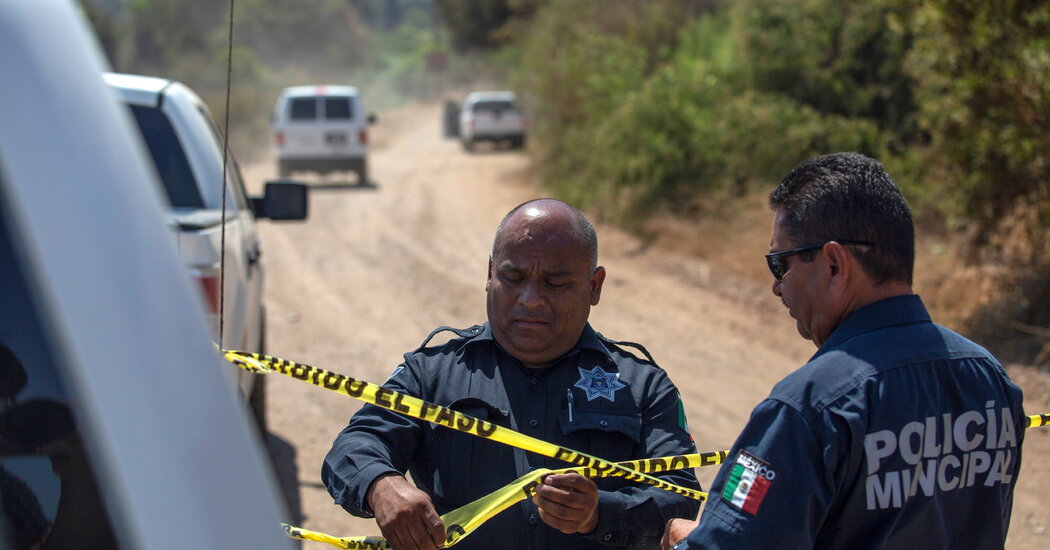 A California surf instructor confessed to killing his two children with a speargun after kidnapping them, telling investigators his belief in conspiracy theories known as QAnon had prompted him to do so, the authorities announced on Wednesday.

The father, Matthew Taylor Coleman, of Santa Barbara, drove his 2-year-old son and 10-month-old daughter to Mexico over the weekend and shot them dead on Monday, according to an FBI investigator.

In a nine-page criminal affidavit filed Wednesday in U.S. District Court in Los Angeles, the FBI special agent wrote that Mr. Coleman told authorities he knew what he had done was wrong, but that was the only solution. who would save the world.

“Mr. Coleman said he believed his children were going to become monsters and therefore had to kill them,” Special Agent Jennifer Bannon wrote. Coleman explained that he was enlightened by QAnon and Illuminati conspiracy theories and received visions and signs that his wife, AC, possessed snake DNA and passed it on to her children.

Mr Coleman described himself as a follower of QAnon, the pro-Trump conspiracy movement whose supporters falsely claim that a cabal of Democrats and coastal elites engage in pedophilia and worship Satan. The conspiracy movement has been the subject of warnings from the FBI that its supporters may resort to violence.

Mr. Coleman, 40, was charged Wednesday with the overseas murder of U.S. nationals and remains in federal custody, authorities said.

A federal public defender who represented Coleman at a detention hearing Wednesday in federal court in Los Angeles, where he was sentenced to detention without bail, did not immediately respond to a request for comment. Mr. Coleman is due to be arraigned on August 31.

Mr. Coleman is the founder of Lovewater, a surf school in Santa Barbara that offers private and group lessons, in addition to surf therapy. A biography on the company’s website describes him as a surfing champion and mentor to youngsters who enjoy spearfishing and sailing. The website features photos of Mr. Coleman with his wife and two children.

Investigators said Mr. Coleman’s wife first contacted the Santa Barbara Police Department on Saturday, the same day Mr. Coleman left with the couple’s children in their Mercedes Sprinter van and did not not said where he was going. The family were supposed to go camping and Mr. Coleman did not respond to his wife’s text messages, authorities said.

Using the “find my phone” feature on her laptop, Mr. Coleman’s wife learned on Sunday that he was in Rosarito, Mexico, a beach town about 16 miles south of the border town of Tijuana, according to the criminal affidavit.

On Monday, he showed Mr. Coleman was still in Mexico and was near the San Ysidro port of entry, where another FBI agent questioned him as he attempted to re-enter the United States, said authorities. There was no sign of her children, according to investigators, who said they found blood on the vehicle’s registration papers.

The bodies of Mr. Coleman’s two children – identified in court records only by their initials: the girl was RC and the boy was KC – were found in a ditch by Mexican authorities, and they had large puncture wounds in the body. chest, according to the FBI. noted. In the affidavit, investigators wrote that Mr. Coleman told them he threw the speargun into a stream and his bloody clothes in a trash can by a road in Tijuana.

Investigators said Mr Coleman told them his son was still alive after shooting him with the speargun and continued to move the spear. He told an FBI agent he shot the speargun into his daughter’s heart, authorities said.