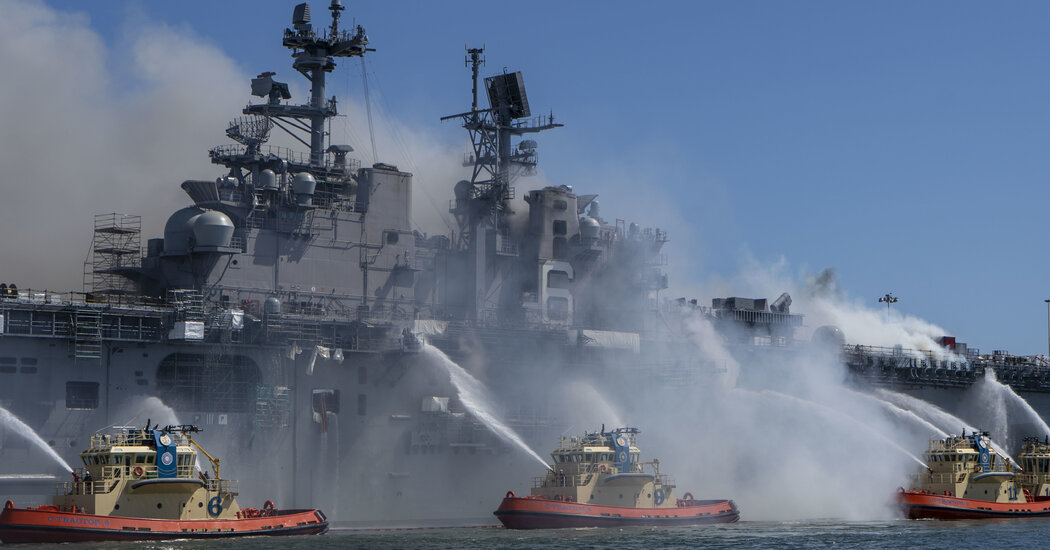 WASHINGTON – Investigators have identified the Navy sailor accused of starting a fire that engulfed the warship Bonhomme Richard and burned for days at a Navy base in San Diego last year.

The sailor, Ryan Sawyer Mays, 20, joined the service in May 2019 and holds the rank of Apprentice Seaman, according to Navy records. The Navy formally charged Seaman Mays with aggravated arson and endangering a ship last month, but declined to provide further details until federal search warrants are unsealed by a federal court from San Diego on Tuesday.

Documents filed by the Naval Criminal Investigative Service describe a sailor who ‘hated’ the Navy after being sent to a warship after a brief stint as a SEAL trainee in late 2019.

The blaze, one of the worst to engulf an American warship outside of combat, rendered the ship inoperative while docked at the base. More than 400 sailors from 16 nearby ships battled the blaze, which reached temperatures of 1,000 degrees and took four days to extinguish.

A lawyer representing Seaman Mays said his client had “maintained his innocence throughout this ordeal”.

“He is presumed innocent, and we look forward to the opportunity to review the evidence and present a case on his behalf,” lawyer Gary S. Barthel said in an interview Wednesday.

Seaman Mays, whose identity was reported earlier by The Daily Beast, was confined in a Navy brig from around late August to around mid-October 2020 and then released, according to Barthel. It is not known why the Navy freed Seaman Mays months before he was officially charged.

After his release from the brig, Seaman Mays reported to the personnel of Amphibious Squadron 5 in San Diego, where he is currently posted.

“He’s supposed to do his job like he would any other day of the week, like any other sailor,” Mr. Barthel said of his client. “There are no restrictions on his movements. “

Mr Barthel said his client voluntarily left the SEAL program and hopes to resume training in the future.

“I think he would like to go back if he gets the chance, if he meets all the other qualifications,” said Mr Barthel.

A spokesperson for Naval Special Warfare Command in Coronado, which oversees SEAL training, could not immediately confirm details described by NCIS.

The NCIS report said that the command chief of Bonhomme Richard – the ship’s top seaman and a key advisor to the commanding officer – described Seaman Mays as “a person who has shown contempt for authority and authority. US Navy ”. The report further noted that “the morale and demeanor of Sailors who had aspired to become a SEAL, and then found themselves serving in a more traditional role on a Navy vessel, are often very difficult.”

Seaman Mays was assigned to Bonhomme Richard’s Bridge Division, which is responsible for maintaining the physical condition of the ship – work often involving manual labor such as rust removal and painting.

The warship was undergoing a long period of maintenance and was moored when the fire broke out on a Sunday morning, with fewer than 200 sailors on board. The unsealed documents indicated that Seaman Mays was on duty aboard the vessel that day.

READ Also  As China boomed, it didn’t take climate change into account. Now it must.

Navy officials estimated the 800-foot-long amphibious warship to be a total loss after repair estimates hit more than $ 3 billion. The ship was decommissioned on April 14 and towed through the Panama Canal. It will be cut into scrap in Texas.

According to NCIS, a witness identified Seaman Mays as the only person who entered a vehicle storage area at the bottom of the ship on the morning of the fire, shortly before smoke billowed from it. compartment. The report indicated that he may have left the storage area through an escape chest and returned to his mooring area. A second sailor recalled that Seaman Mays had entered the mooring area to “tell everyone to get off the ship because the ship was on fire”.

Seaman Mays completed a questionnaire for investigators eight days after the start of the fire and was the only member of the crew aboard the vessel on July 12, 2020 to report smelling a “smell of burning fuel / rubber” from the fire, the documents mentioned. Investigators said the terminology Seaman Mays used to describe the smell of the fire was “consistent with the objects and materials” special agents from the Bureau of Alcohol, Tobacco, Firearms and Explosives found in the compartment. storage of the vehicle after the fire has been extinguished.

Seaman Mays faces a preliminary hearing known as the Section 32 Inquiry, the results of which will either recommend that he be referred to court martial or that the charges be dismissed. The final decision on whether Seaman Mays will be tried will be made by the Commander of the Navy’s Third Fleet, Vice Admiral Steve Koehler.

Cmdr. Sean Robertson, a spokesperson for Third Fleet, confirmed that “Seaman Apprentice Ryan Sawyer Mays is the sailor who was indicted on July 29” and said: “I have nothing more to add. “