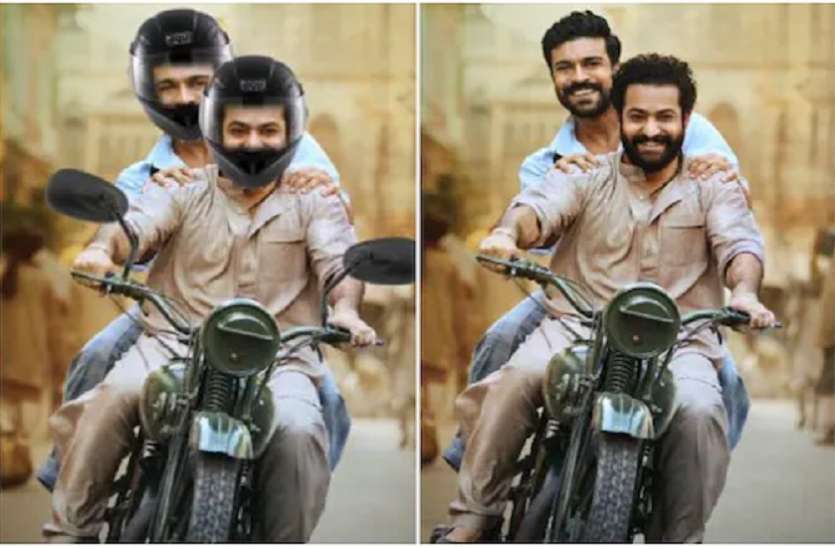 New Delhi: SS Rajamouli’s upcoming film ‘RRR’ is in the news these days. Because this time, the Cyberabad Traffic Police has made fun of the new poster of Ram Charan and Jr NTR’s film, keeping the film’s poster eye on the poster. Due to which people are wanting to know more about this film.

Moving at a rapid pace
Except for two songs, we are done with the shoot. #RRRMovie@tarak9999 & @alwaysramcharan have completed the dubbing for 2 languages ​​and will wind up the rest soon. 🔥🌊 pic.twitter.com/6g1h5yTQhK

In the posters released, Komaram Bheem playing the character of Jr NTR and Alluri Sitaram Raju as Ram Charan are shown riding a motorcycle, the makers recently released this poster on social media, tweeting, ‘Ramaraju and Bhima.’

Now it is perfect.

He wrote on the tweet that, ‘Now this poster wearing a helmet is perfect. Be safe.’ However, taking this matter more seriously, the makers have responded to their poster and wrote, ‘It is still not right. Number plate is missing.

The film ‘RRR’ is based on the lives of two 20th century freedom fighters Alluri Sitarama Raju and Komaram Bheem. Which Ram Charan and Jr NTR are playing on screen. Apart from this, Ajay Devgan and Alia Bhatt will also be seen in it.