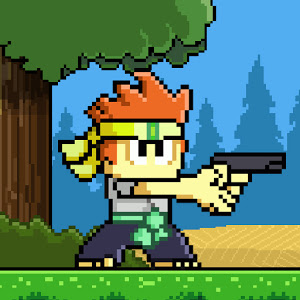 Dan The Man is an Arcade-style game developed by Halfbrick Studios, who created the Fruit Ninja and Jetpack Joyride. If you remember the Super Mario Bros gameplay then you will find both these games identical. It’s a bot fighting game, where you have to fight with the bots to kill them.

Your goal is to progress by performing your duties in the funny universe you are characterizing with the control you provide and destroying all your enemies. There are three different modes in the game such as Story Mode, Endless Survival Mode, and Battle Mode.

The Story mode will elaborate on the game’s storyline by showing subtitles in between the scenes. This gives you a better idea about the game and how to clear stages in Dan The Man. Once you’ve completed the main campaign, there’s also Battle Mode – a series of increasingly difficult arena fights, Survival Mode, and weekly challenges that vary between minigames, time trials, and arcade brawls.

The Endless Survival mode is for those who need a point-based mode where you have to survive by fighting the enemies as far as possible. In Battle mode, you have to battle with the enemies real hard to complete specific levels and achievements. You will get different weapons and powers to fight against your enemies. And all weapons can be upgraded or bought by spending coins in Dan The Man.

You can choose from two different characters Dan for males and Josie for Females. The game controls are simple forward, backward, jump and punch. Reaching a savepoint will save the game and you will continue from the same point once you restart.

Within a very short span of time, Dan The Man became one of the best retro arcade games. If you are a person who loves to play simple action games apart from Call of Duty or other high-end games, then Dan The Man will be a good time buster.

As you progress in the game, you have to make sure that you are fast enough to run and fight enemies. Taking a break might get you killed. To give it a try yourself download Dan The Man now by clicking on the button above. You will download an APK file and install it. Let us know what you think in the comments section below.