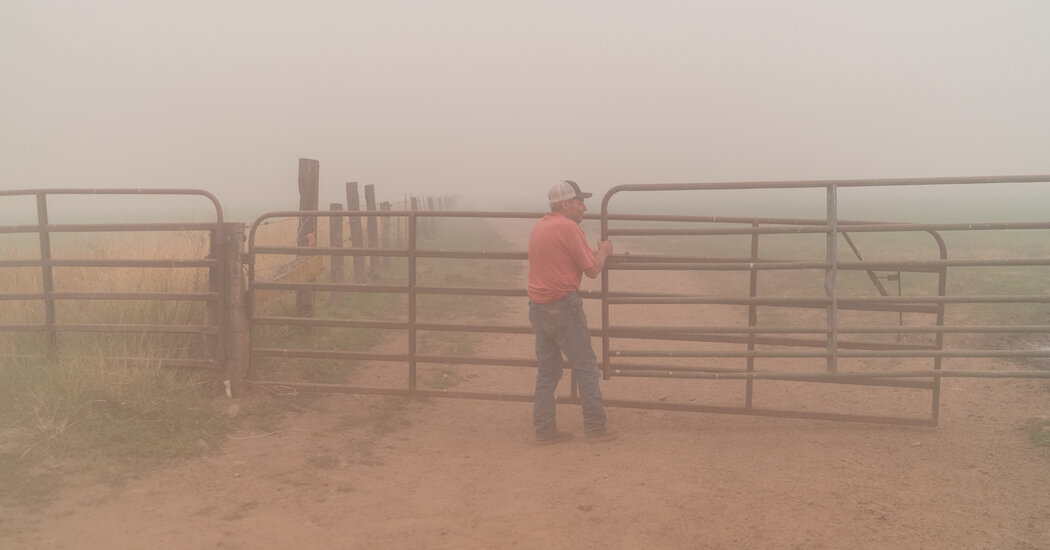 Dixie Fire In California Is Felt Outside of State’s Borders

TAYLORSVILLE, Calif .– Captured by an astronaut’s camera, the Dixie Fire appears as a thick, sickening miasma pouring out of the earth’s surface. At its center in California’s eastern mountains, the fire devours acre after acre of rugged wilderness to become the second-largest blaze in the state’s history.

But Dixie and other mega-fires in the West have left a far bigger footprint than the evergreen forests they level and the cities they decimate.

Summer after summer, California, a world leader in combating air pollution from vehicles, is sending giant clouds of haze filled with health-damaging particles across the country. Even as far away as Denver, 1,100 miles east, the fire helped create a haze of noxious smoke during an already scorching summer.

Wildfires – intensified by drought and climate change – are the biggest source of life-threatening air pollution in California, according to one measure. And in recent weeks, haze and smoke from the California fires and high ozone levels have turned the air in Salt Lake City and Denver into one of the dirtiest in the world, more harmful than that of Delhi or Beijing in recent days.

Smoke from wildfires in western Canada, Oregon and California has stained the skies and polluted the air as far as Iowa, Minnesota and even New York City. Recent research suggests that smoke may actually become more toxic as it ages, undergoes chemical changes, and blows across the country, reacting with sunlight and other molecules floating in the air. Over time, smoke can form reactive compounds that can be particularly harmful to the body when inhaled.

Air quality deteriorated so badly last week in Utah that several schools have decided to cancel sports and outdoor activities. Provo high school canceled a game on Friday night. Summer camps in Washington state have been suspended or canceled.

Twenty-seven days after ignition, the Dixie Fire has still not claimed any lives, although three firefighters have been injured and 433 homes and businesses have been destroyed. What sets the Dixie Fire apart from mega-fires of previous years is the vast area it ravaged in the mountains northeast of the state capital, Sacramento. With 489,287 acres burned, the fire is still only 21% contained.

And exhausted firefighters battling the Dixie blaze in and around Gold Rush towns warn smoke and fire season could take hold of the drought-stricken West for months to come. .

“I have no doubt in my mind that this is just the beginning,” said Matt Sanders, a fire truck captain.

In the remote mountainous communities that dot Plumas County, a sparsely populated county near the border with Nevada, choking smoke hangs in the air. Electricity is cut off, and in some places water is scarce both for fighting fires and for drinking. Residents who have decided not to evacuate collect meat and groceries from their neighbors’ refrigerators. Others are isolated, awaiting deliveries of food, medicine and gas from community firefighters.

One family said they tried to evacuate, but were forced to return to their property. “My dad has dementia and if we leave the area he just wants to come home,” said Jack Cunningham, who looked after his parents at their home in the forest near Taylorsville. Her mother needs oxygen which is supplied by a generator.

“We tested her to see how long she can go without oxygen, right now it’s about 30 minutes,” said Mr Cunningham’s sister Dena Cunningham, adding that their plan if they were to evacuate , was to take two portable oxygen tanks, each lasting 45 minutes.

In areas already ravaged by fire, the forests are strangely quiet. Every now and then a burnt tree cracks and falls. Stunned deer roam the rubble. People sleep in caravans in parking lots, dazed by the movement.

READ Also  Andrew Yang Believes in New York and Himself. Is That Enough?

Around Taylorsville, a tight-knit community, people have been preparing for the blaze for weeks, helping each other dig trenches with bulldozers, install irrigation pipes and water homes. Many pastoralists have packed their most valuable possessions and stored them in cattle trailers in irrigated fields where they hope to be safe if the fire comes down from the mountains. People’s days revolve around tracking every movement of the fire. The sound of generators fills the air.

The giant plumes of smoke erupted by the fires rise into the atmosphere like a huge funnel and drift east. California Air Resources Board data shows wildfires are the biggest source of tiny air pollution particles known as PM 2.5, which can cause lung and heart disease. The fires last year produced hundreds of times more of these particles than passenger vehicles in the state.

When the smoke crosses the continent, it causes anxiety among parents, the elderly and those with respiratory problems.

In rural Vernal, Utah, Heidi Pilling spent Monday morning watching the 29 children she cared for at Little Peeps Daycare as they played by the sandbox.

Six of the children have asthma – just like Ms Pilling – and she said days of unhealthy air stung her eyes and throat and made it difficult to breathe deeply. They normally like to spend two to three hours outdoors on sunny summer days, but Ms Pilling has had to develop fallback plans like evenings of yoga and indoor dancing for days that multiply when the air is on. too toxic to breathe for long.

“If they react badly, we go in,” she said on Monday. “Today is the worst it has been. It’s just gray, gray, gray.

Kirk Chambers, head coach of the Provo High School Bulldogs football team, said he decided to drop out of last Friday’s game after smoke billowed from the Utah huddled up against the Wasatch Mountains and sent the color-coded air quality dials on its phone from orange to red to sickly purple. “If you were only in there for half an hour, you would feel completely lousy,” he said. More and more, this is what the reality of smoky summers looks like: discarded games, students with asthma unable to play safely, and a last-minute race to find indoor courts to train on.

Smoke from forest fires is one of the most dangerous air pollutants – a storm of burnt trees, house paint and insulation, chemicals and more – and has the power to send people away lines of fire to the emergency room with asthma attacks, strokes and heart attacks, the researchers said.

“We care a lot about particles in the atmosphere because they kill people and send people to hospitals with serious illnesses,” said Anthony Wexler, director of the Air Quality Research Center at the University of California, Davis.

In the long run, he said, smoke particles can also stunt the growth of children’s lungs.

But the full effects of such large wildfires are still being discovered, Professor Wexler said.

“We don’t understand the full impact,” he said. “It was unprecedented and now it’s annual.”

On Sunday morning, residents of Taylorsville who gathered for a community breakfast at the fire hall said they felt like they were living in some sort of purgatory while waiting to see if the fire reached them, and meanwhile, suffering the suffocating effects of the mist.

“I breathe in a lot of smoke,” said Lee Newbill, 65, a breeder who pulled up outside the station in his van. “I have never smoked in my whole life,” he added. “I’m making up for it now.”