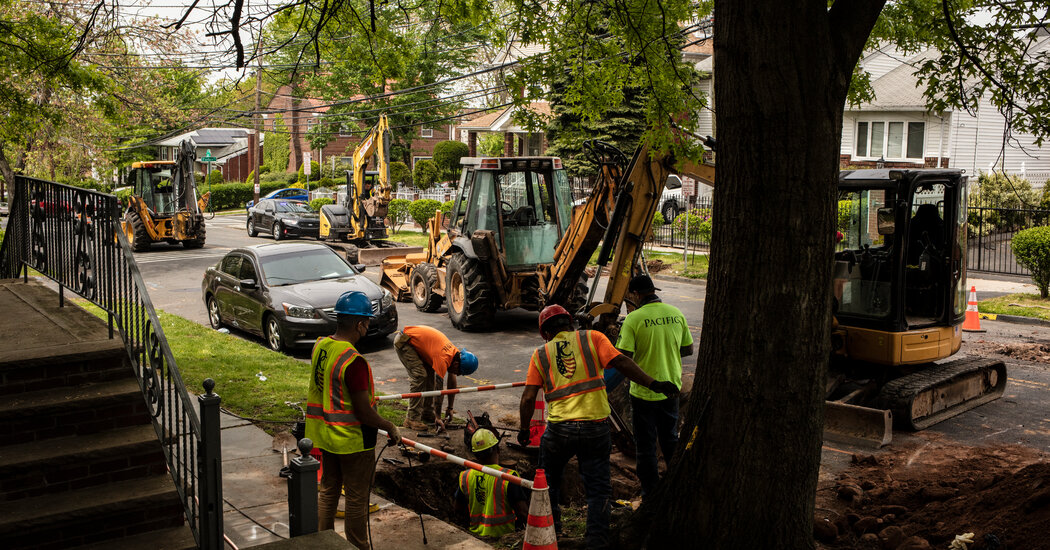 NEWARK – When a police siren suddenly woke Christopher Daniels one morning this spring, he rushed outside. A police officer ordered him to move his car.

But then the officer explained why: Contractors were there to replace the lead pipe that carried water to his century-old Victorian home in the North End of Newark.

Mr Daniels, whose 4-year-old grandson tested for high levels of lead in his blood when he was younger, was relieved. “It could have been disastrous on so many levels,” he said. “It’s a hallelujah moment. “

Working at Mr. Daniels’ home is part of a remarkable milestone in New Jersey’s largest city. Two years after Newark became the scene of one of the worst environmental disasters to hit an American city in decades, nearly all of its 23,000 lead service lines, which had contaminated drinking water, were replaced with copper pipes.

In contrast, Flint, Michigan, which has also been in the grip of a lead contamination crisis, has replaced about 10,000 lead service lines in five years. Crews estimate they have around 300 more to replace, but more than 2,500 households have not cooperated with the project, said Melissa Brown, spokesperson for Flint.

Progress in Newark has been significant enough that the Natural Resources Defense Council, an environmental group that filed a federal complaint accusing Newark and state officials of violating drinking water laws, agreed. to settle the claim in January because it was encouraged by the city’s actions.

“It’s refreshing and welcome,” said Erik Olson, senior director of the organization. “They’ve certainly had a major turnaround from when there was a good deal of downplaying the problem to now having cut the vast majority of their service lines faster than any other location in the United States.”

The city has been able to significantly reduce the amount of lead in its water below levels that the federal government says require action.

For the city’s mayor, Ras Baraka, the progress has provided a chance to exult after being long accused of neglecting, mismanaging and denying the seriousness of the problem. At one point, he sent a brochure to residents assuring them that the water quality met “all federal and state standards” despite evidence to the contrary.

Mr Baraka admitted in an interview that the ordeal of the city and his management of it was a painful learning experience.

He added: “I think for years people hadn’t invested in the water supply system like they should have because it’s insanely expensive, but it’s a cost you are going to have. have to hire if you want quality water.

Despite the progress, some community leaders still give the city low marks.

“Every little squiggle space they could find and take the blame, that’s what they did,” said Saber Bee, founder of the Newark Water Coalition.

To pay for the project, Mr Baraka turned to Essex County, which includes Newark, and $ 120 million in bonds were issued by the County Improvement Authority.

To move efficiently in the city of 285,000, where 74 percent of the population are renters and owners can be difficult to trace, the city passed an ordinance allowing it to replace lines without the owner’s consent.

To speed up the work, workers employ what contractors call a pulling method instead of digging long trenches. At each site, a worker digs up the ground near the curb and digs directly near the main water line under the street. At the same time, another worker in the basement is digging to the service line.

By hand and machine, the lead pipe is pulled out towards the street, while a copper pipe is pulled behind it along the same path and connected to the main water pipe.

Scientists agree that there is no safe level of lead in water and that lead can delay a child’s mental development.

The Federal Environmental Protection Agency estimates that there are as many as 10 million lead water pipes across the country. A bipartisan infrastructure bill making its way through Congress sets aside $ 15 billion for lead pipe replacement – far less than the $ 45 billion proposed by President Biden.

New Jersey has 350,000 lead service lines, according to the American Water Works Association, a nonprofit organization that focuses on water quality and supply. 10 years.

The problem in Newark first emerged in 2016 when high levels of lead were found in the water of 30 public schools. The following year, the state’s Environmental Protection Department ordered an extensive monitoring of the city’s water, which revealed lead levels above the 15 parts per billion benchmark set by the city. ‘EPA.

But Mr Baraka continued to dismiss the seriousness of the problem, at one point posting comments on the city’s website denouncing “absolutely and outrageously false statements” about water quality. The comments were eventually withdrawn.

In August 2019, the EPA sent the city a stern letter, warning those responsible for the lead contamination and demanding that they take action. In response, the city asked tens of thousands of residents to drink only bottled water and handed out thousands of water filters.

“I felt like I was in a movie where you go see the sheriff and he’s in it, everyone you ask for help, they’re in it,” Shakima Thomas said, 39-year-old social worker who said her son, Bryce, 7, had lead detected in his blood. “It was very scary.”

Whenever Bryce gets overly emotional or anxious, Ms. Thomas wonders if lead exposure could be the cause.

The city’s most ambitious initiative was to tackle its aging lead pipes. Just finding some of the decades-old pipes was a challenge, requiring digging through mountains of utility records.

The city also mobilized a large workforce, and as part of its deal with private contractors, several dozen residents – many of whom were unemployed – were hired and trained by a local union and paid up to $ 40 an hour as temporary workers.

The project began in March 2019 in all five Newark neighborhoods, with roads closed and traffic diverted. At the height of the work, crews replaced 125 lead service lines, some up to 40 feet, every day.

The pandemic, which has claimed more than 1,000 lives in Newark, has complicated the schedule as some people were reluctant to open their doors to workers, but officials still expect the project to be completed in the fall.

“The importance of Newark as a national model is because the community rose up and cried out, so it’s unfortunate that it took this to get government moving at all levels,” Yvette said. Jordan, teacher and member of the Newark Education Workers Caucus. , who was another plaintiff in the water quality lawsuit.

As part of the settlement, Newark agreed to complete the replacement of its lead pipes, continue water testing and educate the public on the use of the filters. Lead levels have fallen steadily since last year, and the latest readings, announced by the city in July, were 7 parts per billion.

“We are now considered a model city for lead reduction,” Baraka said in a statement.

Despite the city’s achievements, the malaise over the water supply persists. Every Saturday, Anthony Diaz, 35, another founder of the Newark Water Coalition, hangs a blue banner on the storefront of the Alkaline Xpress holistic wellness center which reads: “WATER IS A HUMAN RIGHT”.

At the wellness center and at a church in another neighborhood, Mr. Diaz fills jugs with filtered water and provides it free to residents so they don’t have to buy bottled water. Between the two sites, he says he has distributed more than 11,000 gallons of filtered water since October.

“It really burns me when people pay for water,” Diaz said.

One recent afternoon, Adrina Sorhaindo, a 66-year-old retiree, picked up a jug for herself and another for a neighbor.

She preferred spending time collecting water because she said that when it comes to the water that comes out of her tap, “I don’t trust it.

Sabrina Hunte, 22, nodded. She grew up in Newark, graduated with a degree in environmental studies from Bowdoin College last year, and volunteered with Mr. Diaz.

“I have a feeling the local government is trying to rebuild trust,” Ms. Hunte said, “but it’s going to take a long time.