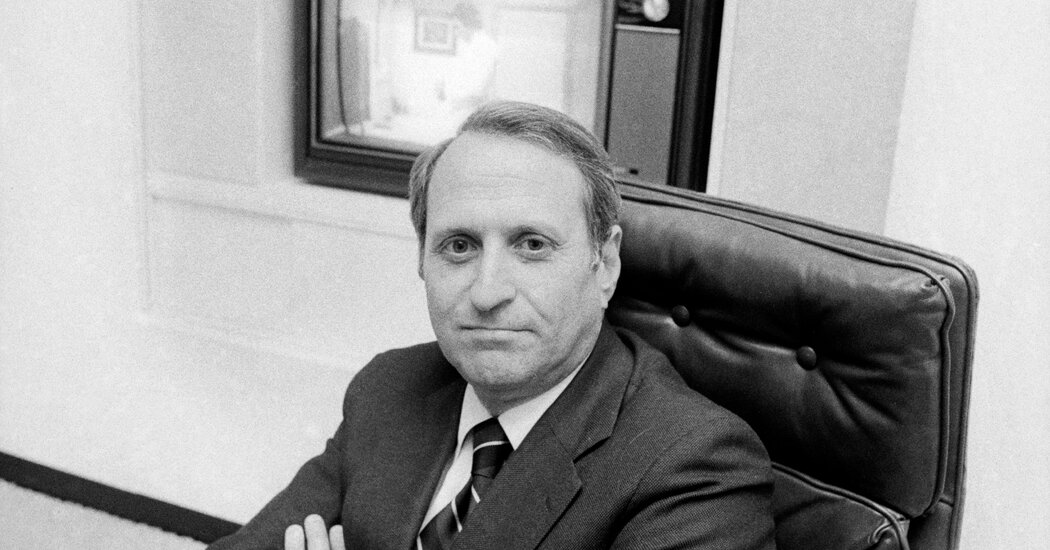 Herbert Schlosser, a longtime NBC executive who left an indelible mark on the network negotiating Johnny Carson’s first contract to host “The Tonight Show,” putting “Rowan & Martin’s Laugh-In” on the air and overseeing the development of “Saturday Night Live,” died Friday at his Manhattan home. He was 95 years old.

His death was confirmed by his wife, Judith Schlosser.

Mr. Schlosser was president of NBC in 1974 when he faced a difficult late-night situation: Carson no longer wanted the network to broadcast covers of “Tonight” on weekends. But pleasing Carson, the network’s most important star, led to an inevitable question: What would NBC air at 11:30 p.m. on Saturday night?

Mr. Schlosser wrote a memo in early 1975 which laid out the fundamentals of an original program that would be televised from NBC headquarters at Rockefeller Center; would be broadcast live, or at least recorded the same day, to keep it current; would be “young and bright”, with a “distinctive look, distinctive ensemble and distinctive sound”; “Seek to develop new television personalities”; and would have a different host each week.

“Saturday night is a great time to put on a show like this,” Schlosser wrote. “Those who are now resuming the ‘Tonight Show’ rehearsals on Saturday / Sunday should be happy about that, and I imagine we would get a lot more clearance with a new show. “

“Saturday Night Live”, originally called simply “Saturday Night” – which followed much of Mr. Schlosser’s formula, and which was produced, then and now, by Lorne Michaels – a made his debut on October 11, 1975, after the first game of the World Series, between the Red Sox and the Cincinnati Reds. Mr. Schlosser had attended the game in Boston with Bowie Kuhn, the Straight-Up Baseball Commissioner, and invited him to his hotel room to watch.

“He didn’t laugh. And I was like, “Well, it’s Bowie,” Mr. Schlosser recalls in “Live From New York: The Complete, Uncensored History of Saturday Night Live as Told by Its Stars, Writers, and Guests” (2002 ), by James Andrew Miller and Tom Shales. “And then after a while he started to laugh. And then he was really laughing. And I was like, ‘Well, if he likes that, it’s going to have a bigger following than most people think.’ “

Mr. Schlosser, a lawyer, had been an executive in the commercial affairs department of NBC, where he negotiated programming contracts to broadcast, among other events, the 1964 Tokyo Summer Olympics and talent contracts like those with comedian Bob Hope, whose specials were a mainstay of NBC’s prime-time programming.

“There was always gimmick in his deals,” Schlosser told Television Academy in an interview in 2007. With each new deal, NBC had to buy land from Hope, one of the largest private landowners in the world. California.

“We bought it, got capital gains and never lost money with it,” Schlosser said.

In 1966, Mr. Schlosser was appointed vice president of programs for NBC on the West Coast, based in Burbank, California. For six years, he participated in the development of numerous shows, some with black stars, like the variety of famous comedian Flip Wilson. series and “Julia,” a sitcom starring Diahann Carroll as a bachelor nurse with a son. He also hired the first woman and the first black person to serve as the department’s vice-presidents.

Mr. Schlosser particularly championed “Rowan & Martin’s Laugh-In”, a fast-paced satirical series that debuted in early 1968. It was then considered outrageous for the political and risky humor of its sketches, performed by a cast of future stars including Goldie Hawn and Lily Tomlin.

George Schlatter, executive producer of “Laugh-In,” recalled that Mr. Schlosser had protected him from those at NBC who found the content of the show offensive.

“Every Tuesday morning there was a parade in his office – censors, lawyers, accountants,” Mr Schlatter said by telephone. “They were like, ‘Herb, talk to him.’ Then he would say to me, ‘I promised them I would talk to you.’ And he was like, ‘Just keep doing what you’re doing.’ “

After serving in the United States in the Navy, he studied public and international affairs at Princeton University, from which he graduated in 1949. Two years later, he graduated from Yale Law School.

He started out as a lawyer at a Wall Street firm, but the insurance work there bored him, and he moved to Phillips Nizer Benjamin Krim & Ballon (now known as Phillips Nizer LLP), a Manhattan firm with many cinema and television customers. This experience led to his hiring around 1957 as general counsel for California National Productions, a film, merchandising and syndication subsidiary of NBC. He later became its chief operating officer before joining NBC’s business affairs department in 1960.

As an attorney for the department, he led talks to bring Carson to NBC to replace Jack Paar as host of “Tonight” in 1962. At the time, Carson was with ABC as the MC of the game show. “Who Do You Trust?” And ABC asked him to complete the last six months of his contract.

Mr. Schlosser testified that he agreed to pay Mr. Carson $ 2,500 per week (approximately $ 21,000 today). But when ABC delayed his departure, one of Mr Carson’s agents re-applied.

“He said, ‘Now that you can’t have it, we want more money,'” Schlosser recalled in the Television Academy interview. “I said, ‘We stick to our price’. “

Mr. Schlosser has grown steadily at NBC. He was appointed executive vice president of the television network in 1972; promoted to president a year later; and appointed chairman of the National Broadcasting Company, the network’s parent company, in 1974 and chief executive officer in 1977.

“He supported quality programming and believed that news was probably the most important thing networks did,” Bud Rukeyser, former executive vice president of corporate communications for NBC, said at a telephone interview. “He gave the news the benefit of the doubt. If the news wanted half an hour to do something, the answer was always yes.

But Mr. Schlosser was ousted in 1978 and replaced by Fred Silverman, who had spearheaded ABC’s rise to the top spot in prime-time audiences as head of programming.

Mr. Schlosser’s reputation had been affected by NBC’s inability to produce a new prime-time hit series the previous season and move out of third place.

Shortly before Mr. Schlosser left NBC, the channel presented “Holocaust,” a four-part miniseries he had endorsed. He won eight Emmy Awards. His main contribution to the project, he said, was persuading executive producer Herbert Brodkin to change the title of the series, which was called “The Family Weiss” after some of its main characters. .

Mr. Schlosser didn’t have to go far for his next job: he was named executive vice president of RCA, the parent company of NBC. His mission was to develop software for RCA’s SelectaVision video disc project. Three years later, he was appointed to lead all of RCA’s entertainment business, which also included RCA Records (but not NBC).

He left in 1985 to become a senior advisor at Wertheim & Company, a Wall Street investment bank, as well as chairman of the future Museum of the Moving Image, which opened in Queens in 1988. He remained there in as chair or co-chair. until 2013.

Besides his wife, Judith (Gassner) Schlosser, Mr. Schlosser is survived by his son, Eric, the author of “Fast Food Nation”; one daughter, Lynn Jacobson, former director of film and television; five grandchildren; and six great-grandchildren.

Schlosser once reiterated his certainty that “Saturday Night Live” could be a part of NBC for a long time, just as “Tonight” and “Today” were. Another late-night hit model at NBC under his watch was “The Midnight Special,” a series featuring pop and rock artists, which aired on the Friday after “The Tonight Show” from 1973 to 1981.

“NBC had this tradition of being successful with shows like this,” he told Television Academy. “For me, it was obvious.”