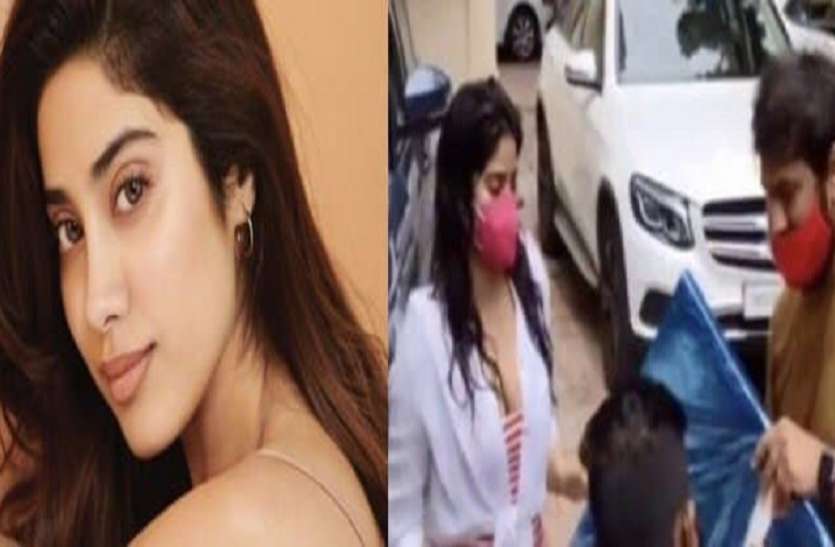 Janhvi Kapoor Meets Fan Who Came All The Way From Rajasthan

New Delhi. A different level of craze has been seen among fans for Bollywood stars. Fans are ready to do anything for their favorite stars. It is often seen that their fans express their love for their favorite stars with beautiful gifts, or their unique art. It was seen with actress Janhvi Kapoor on the previous day. His fan had come from Rajasthan to meet Janhvi Kapoor. Along with this, he also had a big gift in his hand. During this, there was a crowd of paparazzi there to capture Janhvi in ​​the cameras. As soon as this video of Janhvi surfaced on social media, she started getting trolled. Know what is the reason.

Actually, something happened that after working out on July 9, she comes out of her Pilates studio and starts sitting in her car. Paparazzi stand outside the gate to click pictures and videos of Janhvi. Then a voice comes that call Janhvi in ​​this, she has come from Rajasthan.

Janhvi is told that she has a fan who has come from Rajasthan and has been standing for a long time. The people of the paparazzi also appeal to invite the bus fan inside. Janhvi asks the security guard to ask the fan to come inside the gate.

As soon as the door is opened, the fan moves towards Janhvi with a big gift in her hands. Fan clicks pictures with his favorite actress. Janhvi also accepts the gift given by the fans and leaves after keeping it in the car.

When this video surfaced, people did not like the behavior of Janhvi’s fan. This is the reason why Janhvi is now being trolled a lot on social media. Trollers on social media told Janhvi things like being arrogant and not acting.

Also read- Actress Janhvi Kapoor took a luxurious house in Mumbai at the age of 23, people were blown away after hearing the price

Talking about the work front of the actress, recently Janhvi Kapoor’s film ‘Roohi’ was released. In which she appeared with actors Rajkumar Rao and Varun Sharma. At the same time, soon she will be seen in big films like ‘Dostana 2’ and ‘Takht’. Due to which a lot of excitement is being seen among the fans.