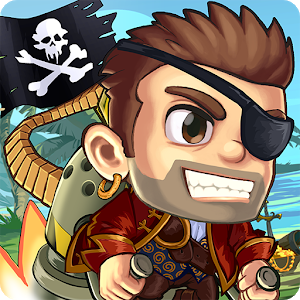 Help Barry Steakfries in the unlimited Jetpack Joyride – through a continuous platform of on-coming obstacles. Movement forward is automatic and all you have to do is press and hold on the screen to move up and let go to move down. Coins can be collected along the way which can be used to unlock features such as skins, jet packs and special power-ups

Coming from the same developer’s Team as Fruit Ninja. Half Brick studios introduced this game back in 2011 as a side-scrolling game. In Jetpack Joyride, players attempt to escape from a laboratory after stealing a specialized jetpack that propels itself by shooting bullets. The stealing bit is part of the initial story and the game begins with a player already equipped with a jetpack.

As an endless runner game, there are numerous things that will keep you engaged while you try to progress through the lab. The basic Jetpack Joyride mechanic is that by pressing on the screen, the jetpack’s thruster will engage. When the throttle is turned off, gravity kicks in to pull Barry back to the lab’s floor.

There is no control over the x-axis, our joyrider just goes faster and faster until it’s game over. Miss some coins and want to go back? Too bad. The trick becomes knowing how to hop over some obstacles and when to hover in the middle of the screen by tapping the throttle button.

There are only two basic obstacles: electric fences that form a line and red lasers that will appear to take up the entire screen. But will actually only cover the portion of the field indicated by a thinner, warning beam. You will also need to dodge the missiles which shoot across to take out the jetpack thief. An alarm will be sounded and the missile trajectory indicator will highlight screen making it easier to dodge the missiles.

At first, all of this is easy to avoid. The coins scattered throughout the map are equally simple to gather. But, as you progress, it gets considerably more difficult as the game’s speed increases. You also get some amazing powerups along the way. An armored stomper to stomp everything which will only get destroyed by incoming missiles.

If you like Jetpack Joyride then you can explore other games such as Fruit Ninja, Temple Run, Minecraft: Pocket Edition Demo, Angry Birds Action!, Angry Birds and Spider-man Unlimited.

For more info and to explore other games from the same developer you can visit their website. Let us know what you think in the comments section below.