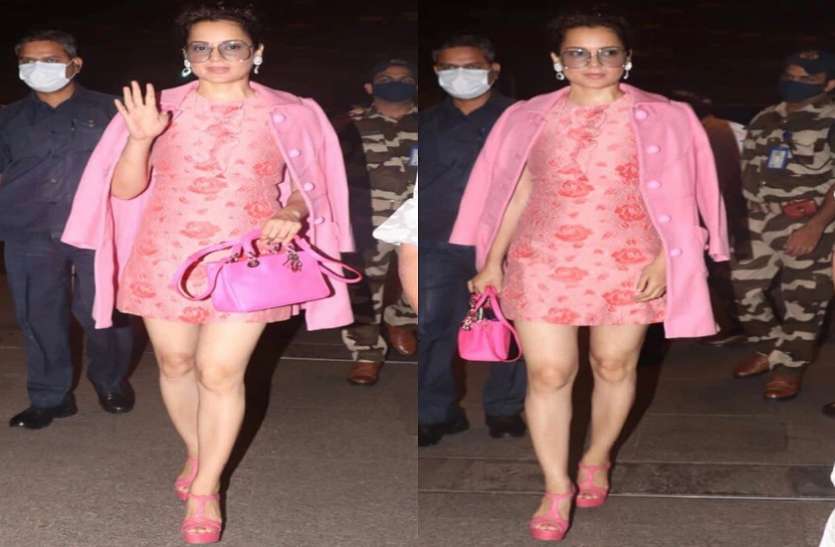 New Delhi. Bollywood actress Kangana Ranaut is often seen surrounded by controversies. For a long time she was worried about her passport. At the same time, the actress has left for Budapest after getting the solution of this problem of the actress. The actress was spotted at the airport. Where her pink outfit caught everyone’s attention. Kangana’s bold style was also seen in her look.

Kangana Ranaut out for the shooting of the film ‘Dhaakad’

Bollywood actress Kangana Ranaut was spotted at the Mumbai airport. It is being told that the actress has left for Budapest from Mumbai. Where she will start shooting for her film ‘Dhaakad’.

Kangana’s modern look made everyone crazy

By the way, often whenever Kangana Ranaut was spotted at the airport, she is seen wearing an Indian outfit i.e. a sari. At the same time, this time the look won everyone’s heart.

On the last day i.e. Wednesday, she has been seen in a pink color outfit at the Mumbai airport. Kangana was also wearing pink colored sandals matching her dress.

Also read- Kangana Ranaut’s retort on Jaya Bachchan’s sharp statement, the actress tweeted and asked, ‘If this happened with Shweta Bachchan, would you say the same thing? ‘

Kangana looked very beautiful in a cutout sleeve dress. Along with this, he was also wearing a light pink color coat to make the look more stylish. In which she was looking very glamorous.

Kangana did minimal makeup with Modern Out. Also took the matching purse. Along with this, Kangana also wore shades of pink color. Also, as usual, he had made a bun of his hair. posing

Let us tell you that Kangana was worried about her passport for a long time. After which the actress completed all her papers and after that she got a chance to travel abroad. Soon Kangana will be seen in the films Thalaivi, Tejas and Dhaakad. The shooting of the film Thalaivi has been completed. Also the trailer of the film is out. Which was given a lot of love by the audience.