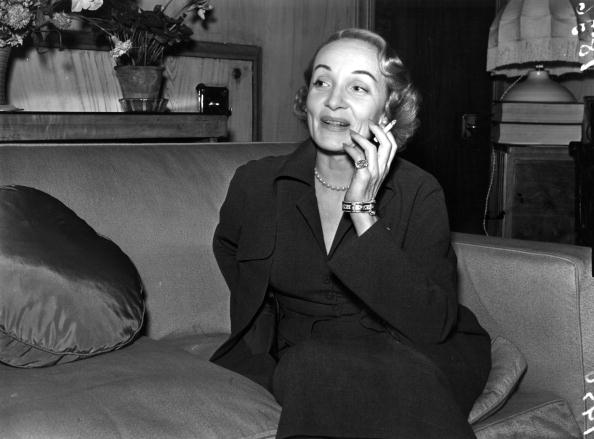 What was Marlene Dietrich’s Net Worth?

Marlene Dietrich was a German actress and singer who had a net worth of $10 million at the time of her death. That’s the same as roughly $20 million in today’s dollars after adjusting for inflation. Marlene Dietrich began her career on the stage and in silent Weimar German films. She went on to become one of the most famous stars of Hollywood’s Golden Age, with her credits including “Destry Rides Again,” “Stage Fright,” “Witness for the Prosecution,” and, most notably, six films by director Josef von Sternberg, including “Shanghai Express” and “The Scarlet Empress.” Dietrich spent the later decades of her career touring the globe as a live-show performer.

At her peak, she was one of the highest-paid actresses in the world.

Marlene became a United States citizen in 1939. She toured in the 1950s, 60s, and 70s as a show performer. Dietrich was nominated for an Academy Award for Best Actress in a Leading Role and a Golden Globe Award for Best Motion Picture Actress – Drama. She was awarded a star on the Motion Picture Walk of Fame in 1960 at 6400 Hollywood Blvd. She was named the ninth greatest female star of all time by the American Film Institute in 1999. Marlene Dietrich passed away on May 6, 1992 at 91 years old.

Marlene Dietrich was born as Marie Magdalene Dietrich on December 27, 1901 in Berlin, then part of the Kingdom of Prussia. Her mother, Wilhelmina, hailed from a wealthy family and owned a clock-making and jewelry company, while her father, Louis, was a police lieutenant. She had an older sister named Elisabeth. As a youth, Dietrich went to the August-Viktoria Girls’ School, and graduated from the Victoria-Luise-Schule. She first became interested in theater as a teenager; she also studied violin.

Dietrich got her professional career start as a chorus girl with Guido Thielscher’s Girl-Kabarett vaudeville shows, and also performed in Rudolf Nelson revues. In 1923, she made her feature film debut with a bit part in “The Little Napoleon.” The same year, Dietrich was in “Tragedy of Love.” Throughout the 20s, she was prolific both on stage and in film. Her stage credits included “Pandora’s Box,” “The Taming of the Shrew,” and “Misalliance,” plus musicals and revues such as “Es Liegt in der Luft” and “Zwei Krawatten.” In the latter half of the 20s, Dietrich had major parts in such films as “Café Elektric” and “The Ship of Lost Souls.”

Dietrich had her breakthrough film role in 1930, when she starred as cabaret singer Lola Lola in Josef von Sternberg’s German film “The Blue Angel.” A global success, the film introduced the world to Dietrich’s signature song, “Falling in Love Again.” Following this, Dietrich moved to the United States and signed with Paramount Pictures. She went on to star in six further Paramount films for von Sternberg through 1935: “Morocco,” “Dishonored,” “Blonde Venus,” “Shanghai Express,” “The Scarlett Empress,” and “The Devil is a Woman.” In these films, Dietrich was framed, lit, made up, and costumed by von Sternberg to emphasize her alluring, mysterious, and statuesque beauty; as a result, she became one of the most iconic of all Hollywood actresses.

Following her collaborations with von Sternberg, Dietrich starred opposite Gary Cooper in 1936’s “Desire.” She was subsequently in “I Loved a Soldier,” “The Garden of Allah,” “Knight Without Armour,” and “Angel.” After a two-year break from the screen, Dietrich returned with an against-type role in the Western comedy “Destry Rides Again,” costarring James Stewart. She was next in “Seven Sinners”; “The Flame of New Orleans”; “Manpower”; “The Lady is Willing”; “The Spoilers”; “Pittsburgh”; “Kismet”; “Follow the Boys”; “Martin Roumagnac”; “Golden Earrings”; “A Foreign Affair”; and “Jigsaw.”

In 1950, Dietrich had a notable role in Alfred Hitchcock’s “Stage Fright.” Subsequently, she was in “No Highway in the Sky,” “Rancho Notorious,” “Around the World in 80 Days,” and “The Monte Carlo Story.” Among the most famous roles of Dietrich’s later film career were in Billy Wilder’s “Witness for the Prosecution,” released in 1957, and Orson Welles’ “Touch of Evil,” from 1958. She only appeared in films sporadically in the 60s, with her credits including “Judgment at Nuremberg” and “Paris When it Sizzles.” Dietrich’s final film role was in “Just a Gigolo,” a West German film from 1978. However, she later contributed to the 1984 documentary “Marlene,” a biography of her life.

Throughout the 50s, 60s, and 70s, Dietrich was prolific on stage as a cabaret artist. She performed live in theaters around the world, with her act eventually transformed into an ambitious one-woman show by her musical arranger, Burt Bacharach. Additionally, Dietrich twice performed on Broadway in 1967 and 1968. Ultimately, her show business career came to an end in 1975 when she fell off the stage and broke her thigh bone during a performance in Australia.

During World War II, Dietrich was heavily involved in humanitarian efforts. With filmmaker Billy Wilder and a number of other exiles, she created a fund to help Jewish people and dissidents escape from Germany. In 1939, Dietrich renounced her German citizenship to become an American. When the United States entered the war in 1941, she was one of the first public figures to facilitate the sale of war bonds. Dietrich also performed with the USO for Allied troops throughout Europe and Africa. For her honorable work, she received the Medal of Freedom in 1947.

While Dietrich had a highly manicured professional image, much of her personal life was concealed from the public. However, she was known to be bisexual, and to proudly flout conventional gender roles. Notably, Dietrich had a plethora of affairs of varying lengths, including with actors Gary Cooper, John Gilbert, Douglas Fairbanks Jr., James Stewart, and Jean Gabin. In Paris, she had an affair with cabaret hostess Suzanne Baulé. Dietrich’s other relationships – with everyone from Yul Brynner to John F. Kennedy – are legend.

Despite all her romantic relationships, Dietrich was married only once: to assistant director Rudolf Sieber. Wed in 1923, the couple had a daughter named Maria, and remained married until Sieber’s death in 1976. Much later, in 1992, Dietrich passed away from kidney failure at her Paris flat. She was 90 years of age.