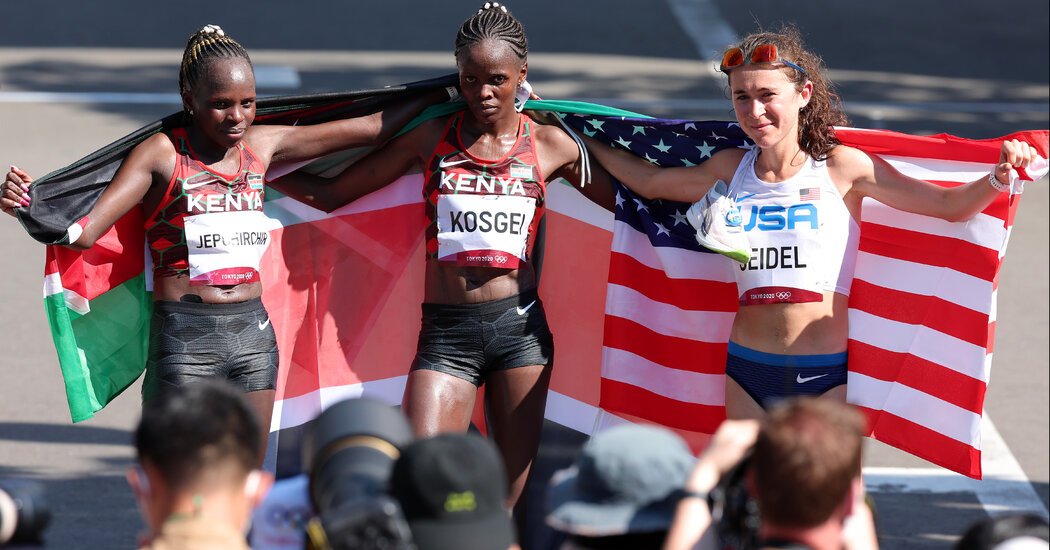 At 30 kilometers, or 18.6 miles, Seidel ran past nine runners as the course was speckled with shadow. The temperature on the tarmac was over 100 degrees, according to the NBC television broadcast. Even some of the biggest runners who faced the worst heat started to falter. Ruth Chepngetich from Kenya, who won the 2019 marathon world championship in brutal conditions in Doha, Qatar, where the temperature was still 90 degrees at midnight, fell and started walking.

At 20 miles, the field was reduced to seven contenders, then five, then four who would decide on the three medals. NBC showed a note Seidel wrote in fourth grade: “I wish I could go to the Olympics and win a gold medal.”

At 23 miles, Jepchirchir and Kosgei started to pull away. Another contender, Chemtai Salpeter from Israel, trying to win the country’s very first medal in athletics, was unable to continue. Seidel had bronze if she could hold out.

With about a mile and a half remaining, Jepchirchir, the half marathon world record holder for a women-only race with a time of 1:05:16, started to pull away from Kosgei. Kosgei, whose world record of 2:14:04 was set in the 2019 Chicago Marathon, has started to falter.

Earlier in the race, Jepchirchir had driven for miles with a bottle of fluid tucked into his shirt to keep a supply of carbohydrates available. As she neared the finish, what appeared to be a small bag of ice came out of her jersey. At the tape, she smiled, then leaned down and appeared to be praying.

It was the second consecutive Olympic marathon victory for a Kenyan woman. But Jemima Sumgong, the 2016 winner, is now serving an eight-year doping suspension. Jepchirchir’s victory is seen as a matter of redemption and a hoped-for indication of restored integrity.

Seidel started to pump her fists, point the “USA” on her jersey and scream as she neared the finish. Until the 2020 Olympic selections, she had never run a marathon. Saturday was only his third. But she had run with intelligence, confidence and patience in appalling conditions. And she was now an Olympic medalist.