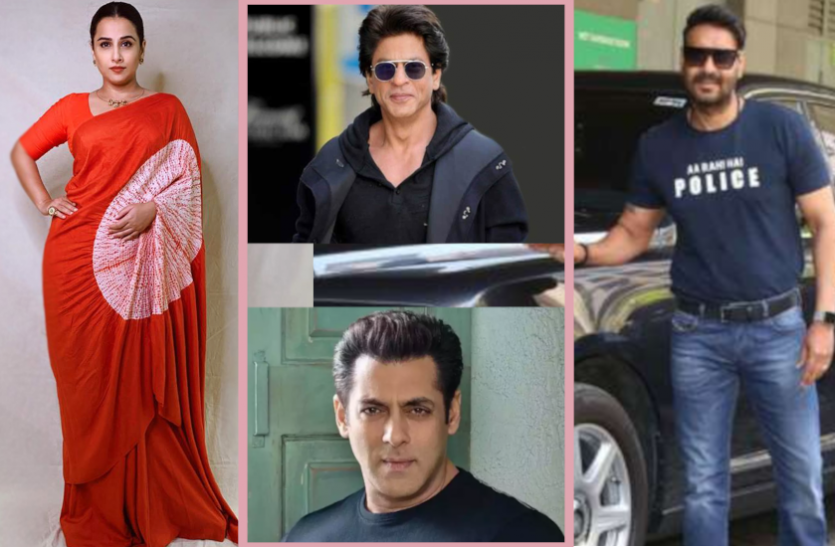 Obsession Of Bollywood Actors And Actresses – Ajay is fond of trains, Vidya is fond of sarees, know the hobbies of these stars including Shahrukh-Salman

Mumbai. Who does not want to know about the personal life, lifestyle and clothes of Bollywood stars. There is also a craze among fans to know the hobbies of their favorite stars. Today we are going to tell you what things your favorite Bollywood stars are fond of or just say what they are crazy about. Let’s know-

Actor Ajay Devgan’s hobby is a bit expensive. The actor is fond of luxury cars. He has about 6 luxury cars. It also has a Rolls-Royce Cullinan.

Also read: The Joker of Hollywood has this handsome car and bike, know the price and specialty

As long as there is pink in the world, it will always be a better place… pic.twitter.com/RyQm8ESUMW

Actor Shahrukh Khan, who won the hearts of the audience in romantic roles, is very fond of video games. According to reports, an entire floor in his bungalow is named after video games. They even sometimes take video games along on movie sets.

Bollywood’s ‘Dabang Khan’ Salman Khan is fond of perfumes and herbal soaps. He keeps on collecting these things too. As per reports, he has a huge collection of handmade and designer soaps. They carry this collection with them wherever they go.

READ Also  prachi singh latest hot photos: New Bhojpuri sensation Prachi Singh has shared photos of her latest photoshoot in black on her Instagram account. From the bathtub to the bed, Prachi shared photos that fans can't help but admire ...

Priyanka Chopra Jonas is now not only a Bollywood star but also a Hollywood star. Like Kareena, she is also very fond of shoes. The actress has a collection of more than 80 pairs of shoes.

It is common to see Kareena Kapoor Khan in new fashion and trendy shoes all the time. It is said that Kareena is very fond of buying shoes. He has more than 100 pairs of shoes from different brands.

Actress Vidya Balan is often seen in saree. Even the actress is seen in different types of sarees in her movie promotions. The actress is fond of handcraft sarees. It is said that he has more than 800 saris.

Don’t miss out on @bipsluvurself‘s spine-chilling performance as Special Agent Neha Singh as she makes her comeback after 5 years in @mxplayer‘s thriller series #dangerous pic.twitter.com/pMz13BDHso

Actress Bipasha Basu is fond of hand watches. His collection of watches has a plethora of designer watches.

Actor John Abraham is fond of super bikes. It is said that he has 14 super bikes. He is often seen riding on the streets of Mumbai on his super bikes.

READ Also  What we know about Amber Heard's parents

Ranveer Singh has a lot of craze for deodorants, sanitizers. His actress wife Deepika Padukone also revealed this in an interview. It is said that Ranveer uses more than half a bottle of deo and sanitizer before and after every shot.

Actor Shahid Kapoor is fond of white colored sneakers. They have a separate rack for keeping white color sneakers.