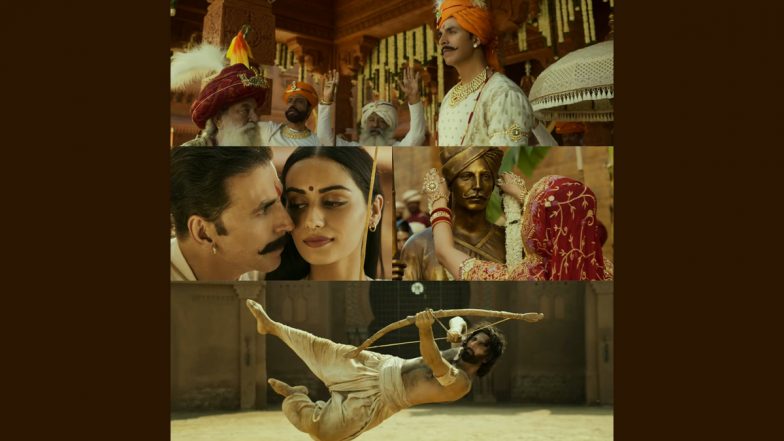 Prithviraj Trailer Out! Akshay Kumar Shines in the Role of Legendary Warrior; Manushi Chhillar Enthrals With Her Dialogues (Watch Video)

The trailer of Akshay Kumar-starrer ‘Prithviraj’ was unveiled on Monday at YRF Studios in Andheri in Mumbai. ‘ The period film has been helmed by Chandraprakash Dwivedi, who has a penchant for historical stories and whose notable works include titles like the 2003 period drama ‘Pinjar’ and epic Indian TV historical drama ‘Chanakya’. Prithviraj Trailer: Akshay Kumar Is a Fearless King in This Heroic Story Also Starring Manushi Chhillar as Princess Sanyogita (Watch Video).

The trailer launch was attended by Akshay Kumar, who plays the titular character, former Miss World Manushi Chillar, who plays the character of princess Sanyogita and the film’s director Dwivedi. While Akshay and Dwivedi sported and twinned in black Indian ethnic attire, Manushi wore a pink lehenga with heavy embellishments.

Dwivedi mentioned that he has been working on the film for the past 18 years and to see his labour of love come to fruition has been a special moment for him. He also shared that the germ of his film finds its place in ‘Prithviraj Raso’, a Braj Bhasha epic poem about the life of Prithviraj Chauhan. Prithviraj Trailer: Netizens Are Mighty Impressed With the Grandeur of Akshay Kumar, Manushi Chhillar’s Epic Tale.

The film sees former Miss World Manushi Chillar making her foray in Hindi cinema. The trailer depicts the heroism and righteousness of Rajput warrior Prithviraj Chauhan amidst the expansive war sequences and the background score, whose percussion eerily remind of A.R. Rahman’s ‘Azeemo Shan Shahenshaah’ from the Ashutosh Gowariker directorial ‘Jodha Akbar’. The point of attraction at the event was the projection mapping of the ‘Prithviraj’ title with a special light show.

The film, produced by one of India’s premier studios YRF (Yash Raj Films), also stars Sanjay Dutt, Sonu Sood, Ashutosh Rana and Manav Vij, who essays the antagonist Muhammad Ghori. Manav is known for his work as the police officer and the murder accomplice of Tabu’s character in Sriram Raghavan’s ‘Andhadhun’. ‘Prithviraj’, which is gearing up for a theatrical release on June 3, will be a trilingual release in Hindi, Tamil and Telugu.

(The above story first appeared on Gadget Clock on May 09, 2022 04:03 PM IST. For more news and updates on politics, world, sports, entertainment and lifestyle, log on to our website Gadget Clock.com).