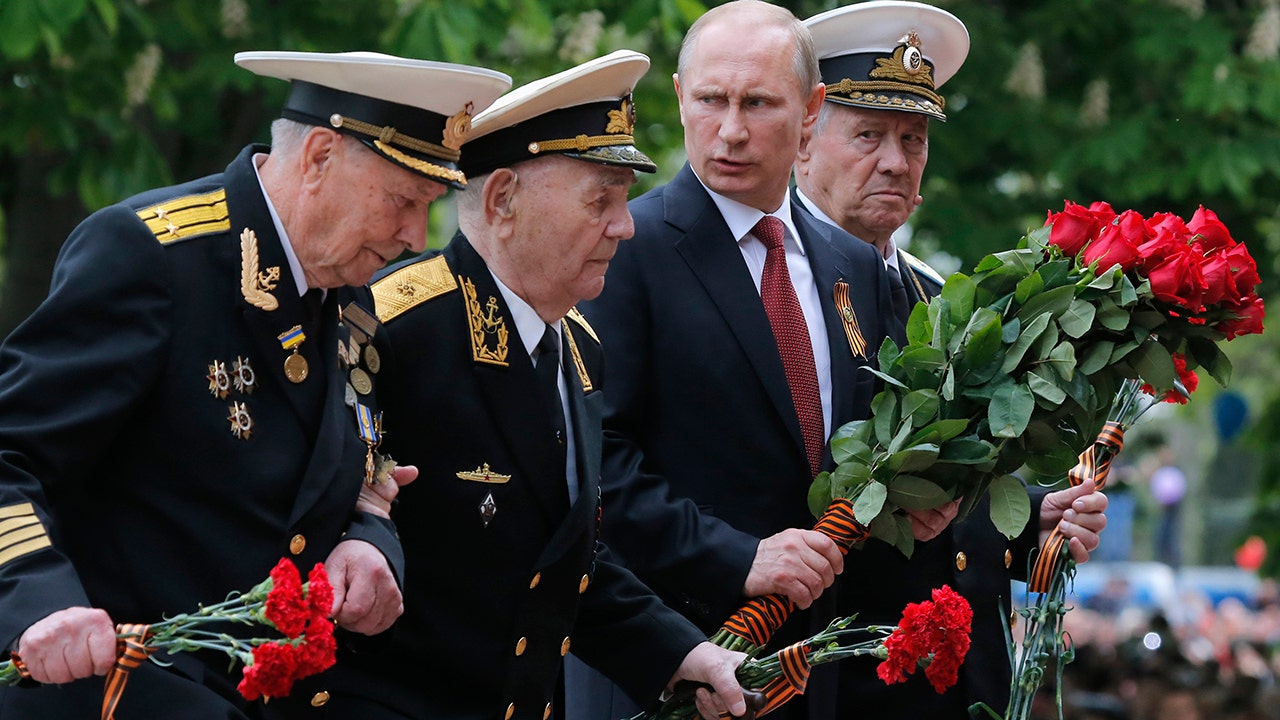 Russian President Vladimir Putin condemned the West in his Victory Day speech at the Kremlin on Monday, claiming that the United States and other countries had created a “threat” on Russia’s border and even supported the threat of a nuclear war against the Kremlin.

“Russia has always stood for an international equality system,” Putin was quoted as saying by Deutsche Welle. “We have always tried to find a compromise solution. … Other countries had completely different plans.”

“They have tried to invade our historic territories like Crimea. They have threatened to use nuclear war and the West has supported these military actions around us and that is why this is a threat we cannot accept,” he said. . He claimed that there was a “threat to our borders”.

Russian President Vladimir Putin (2nd R) stands with military personnel at the May 9, 2014 Victory Day flower-laying ceremony in Sevastopol. Putin visited Crimea for the first time on Friday after Russia annexed the peninsula from Ukraine in March, a visit that could anger the Ukrainian leadership and upset the West. Reuters / Maxim Shemetov
(Reuters / Maxim Shemetov)

“We have seen the development of military infrastructure,” Putin claimed, adding that “more and more international military advisers are coming to the country. The country has been provided with modern weapons. There was a threat that is growing day by day.”

Putin has denounced the United States in name. “The United States, especially after the collapse of the Soviet Union, … has insulted not only the entire world, but also their satellite states.”

“They tried to tarnish the memory of World War II,” he complained.

Putin further claimed that “our country’s enemies have tried to use international terrorism against us,” possibly referring to the increased sanctions against Russia and the confiscation of the assets of Russian oligarchs abroad.

Putin said those who survive today are the “inherited generation” of World War II. “Those who won against fascism in World War II are a symbol for us,” he said.

“Today in Donbass, militias and our forces are standing by to defend our territory,” Putin said. “We have a lot of people that we should remember and they are supporting us in Donbass now. You are fighting for your homeland, for the future of our homeland.”

Following the history of Russia’s victory over Nazi Germany on May 9, 1945, Putin repeatedly tied the current government of Ukraine – led by Jewish President Volodymyr Zelensky – to the Nazis.

“We are dealing with the Nazis,” he said, referring to the visible threat in Ukraine. “We are going to punish the Nazis,” he vowed while cheering on Russian troops in Donbass.

“We also want to honor those who fought with us in 2014,” Putin added.

Russian President Mariupol is seen quoting a unit of the Ukrainian National Guard, the Azov Battalion, which was once a volunteer regiment and saw its first battle in June 2014. In March 2015, Andrei Diachenko, a spokesman for the brigade, USA Today says That’s 10% to 20% Nazi, but the ideology “has nothing to do with Azov’s official ideology.”