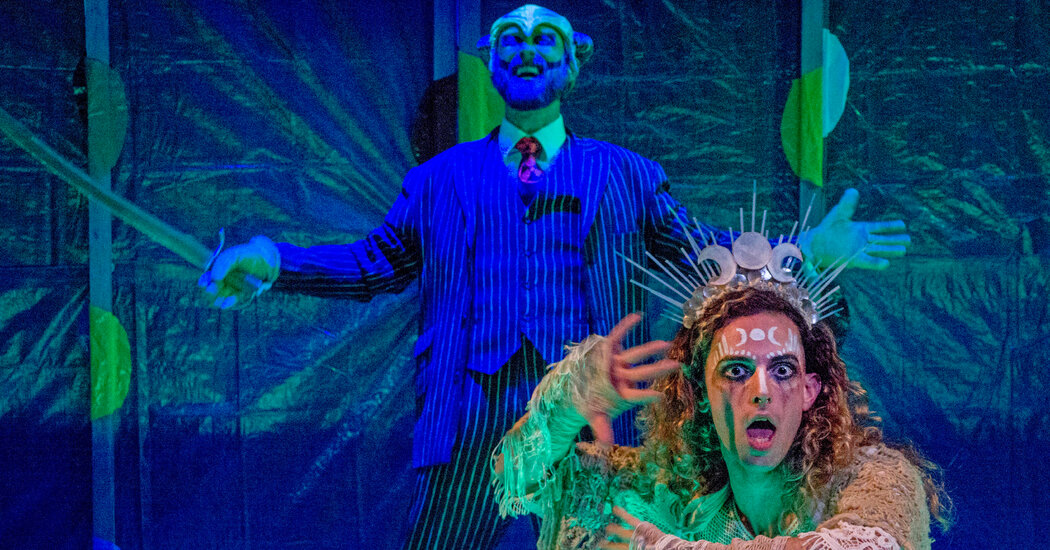 Revisiting the post-apocalyptic game in the pandemic

But the most notable changes are in the staging. In 2015, Wechsler set Act I in a forest; Now, it opens on characters hiding around a stack of burning chairs in a backyard. It is also determined later in the year, how people took into account the timing during the pandemic. “Act I is really, ‘How We Spent the Winter,'” he said.

Earlier productions I’ve seen in Act II drag several times, but Wexler’s new staging is crumpled and fast. “There’s a shared sense of a new normal and managed dreams, the things the characters talk about, like fire and going down the grid, have already happened,” he said. “I wanted that ‘let’s do a show’ feeling in desperate situations.” He was partly inspired, he said, by the things he had taken for granted before, such as friendly meet-and-greets and birthday parties, being difficult during the pandemic.

Wexler also updated the poignant and hilarious “Chart Hits” medley, in which actors perform (and flub) lines from pop songs. He added snippets from Billie Eilish, Lorde and Taylor Swift. Act III, too, has changed: Its formal theater piece sounded sharp, or perhaps I understood better that we needed the grandeur of a chanting mask chorus to communicate apocalyptic horror.

In that scene, the actors also used details from their lives during the pandemic. Leslie Ann Shepard, who plays Bart Simpson, said in an interview: “We included coughing a little more and ‘Stay away from me. We need To cover our faces.'”

During a pivotal moment in Act III, Jenny reads the names of those who have died. “When we first did the show in 2015, we would sing the names of the audience members that evening,” Wechsler said. “It was arresting in its own way, but very worrying and flip after the last 18 months.”

Now names include scripts as well as theater veterans who have died – not just from Covid-19 – including Chicago actor Johnny Lee Davenport and Organic Theater founder Stuart Gordon.

Later in Act III, Mr. Burns brutally murders Homer, Marge, and Lisa, and then Bart begins killing the villain. But when the light comes on, Mr. Burns is not dead. It is revealed at the last moment that he is pedaling more and more slowly on a stationary bike attached to a generator. It’s an image that’s “precarious,” Washburn said. “It can make toggling more difficult or more enjoyable.”