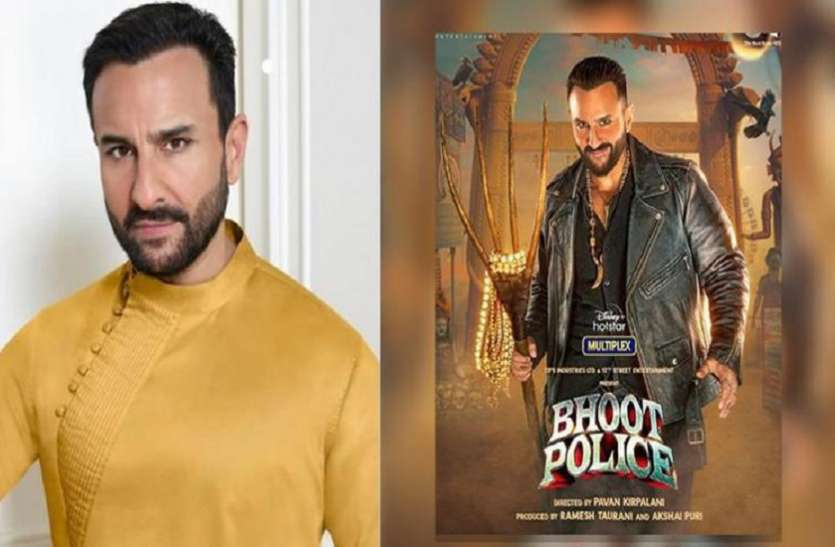 New Delhi. Bollywood actor Saif Ali Khan remains in the headlines every day. There is often some dispute about them. Last time there was a lot of controversy regarding his web series Tandav and now once again Saif Ali Khan is caught in a new controversy. Actually, recently his first look from his upcoming film ‘Bhoot Police’ has been revealed. He is being trolled a lot on social media as soon as the poster comes out.

Actually, the first poster of ‘Bhoot Police’ was released on Monday. Saif Ali Khan is seen in this poster. In such a situation, this poster of hers was shared by Kareena Kapoor Khan on social media. He will be seen in the role of Vibhuti in the film. Due to this, Kareena wrote, Don’t be afraid of the paranormal and feel ‘Saif’ with Vibhuti. The aggressive look of Saif Ali Khan is being seen in the poster. He is wearing a black leather jacket. However, two monks of Hinduism are seen in the background of this poster. Due to this, people got angry on Saif and are accusing him of hurting Hindu sentiments.

One user wrote, Why is a Hindu monk shown behind Saif on the poster of Bhoot Police. Saif Ali Khan seems to have learned nothing from Tandav. Another user has written, Saif Ali Khan is really a ghost. He was part of the Tandav web series which was boycotted. He is a third class actor, he doesn’t even bother to play the role of Ravana in Aadipurush. Many such people have opposed Saif Ali Khan and his poster.

READ Also  How did Shawn Mendes get famous? All you need to know

Also read: The big Bollywood actress who did not change her surname after marriage, told this reason!

In the #BhootPolice poster …why the Hindu sadhus been displayed.. why not paster or clerik..

Hope #SaifAliKhan not been learned from Tandav…

WTF!
Why #BhootPolice poster had Hindu Saints in background ?🤬#BoycottBollywood
Bollywood consistently finds its way to mock Hindu Saints.🤬
Why Bollywood is destroying the Image of Hindu Sadhus and Our Culture.😡😡#SaifAliKhan #ArjunKapoor #YamiGautam #JacquelineFernandez pic.twitter.com/W1WfJ9YBeR

#SaifAliKhan is real #shoot. He was part of #tandav web series which was Boycotted being against #hindutva. He is kind of 3rd class actor who even don’t deserve to be in role of Rawan in #Adipurush #BhootPolice pic.twitter.com/pX2TNGZqCr

Let us tell you that there was a lot of controversy about Saif Ali Khan’s web series Tandav. There were allegations that through this series work has been done to hurt Hindu sentiments. In such a situation, there was a demand to boycott the series. After a lot of controversy, some scenes were cut from Tandav. Talking about the film ‘Bhoot Police’, apart from Saif Ali Khan, Arjun Kapoor, Jacqueline Fernandez and Yami Gautam are in the lead role. Earlier, it was decided to release the film in theaters on September 10. But after that it was decided to release the film on the online platform.