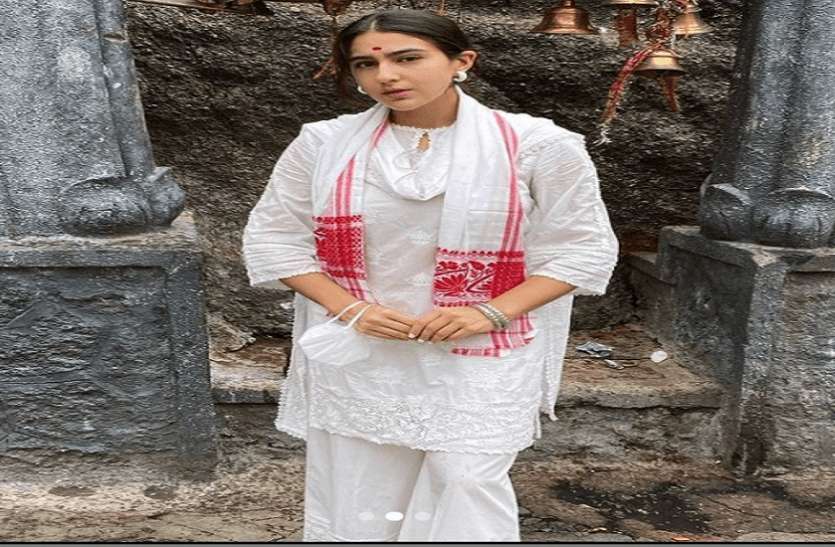 New Delhi. Bollywood actress Sara Ali Khan is known for her acting as well as her special style. She remains very active on social media. And from time to time, by sharing her pictures on social media, she stays connected with the fans. Recently Sara Ali Khan shared pictures of the famous Kamakhya Devi temple of Assam. Which also became quite viral on social media. But seeing Sara’s pictures, many users started trolling her and are questioning her religion.

Read More:- The actress was surprised to see ‘Chhoti Kangana’, the lookalike of Kangana Ranaut, the picture is going viral

Sara had taken pictures standing in front of the Kamakhya temple, which she shared on Sunday. In these pictures, Sara Ali Khan was seen wearing a white suit with a traditional gamchha from Assam and wearing a red tilak on her forehead. Her fans were very happy to see the picture of this style of Sara. But some people started raising questions about Sara’s religion in the comment section.

While some people have praised Sara Ali Khan’s arrival at the Kamakhya Devi temple, some people are criticizing Sara going to the temple despite being a Muslim and questioning her religion.

she’s so pure and pretty🌸

Sara may belong to a Muslim family, but she has been practicing all religions equally. Sometimes she has been seen in Ganesh festival and sometimes seen going to Durga pandal. In the month of February, Sara Ali Khan along with her mother Amrita Singh also went to the Ajmer Sharif Dargah. Sara had also shared her beautiful pictures from Ajmer.

Talking about Sara Ali Khan’s work front, she made her Bollywood debut in the year 2018 with the film ‘Kedarnath’. In which Sushant Singh Rajput was seen opposite him. After this his film ‘Simmba’ with Ranveer Singh was released. In 2020, Sara’s 2 films ‘Love Aaj Kal’ with Kartik Aaryan and ‘Coolie No 1’ with Varun Dhawan were released. Now Sara will soon be seen in the film ‘Atrangi Re’ with Akshay Kumar and Dhanush.