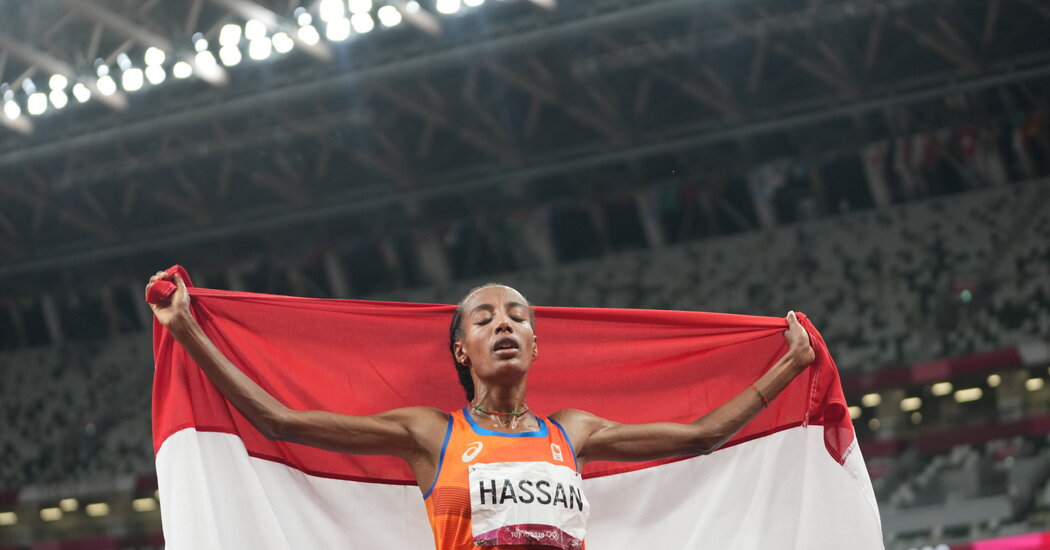 TOKYO – After 24,500 meters of fierce racing in six races over nine days, Sifan Hassan of the Netherlands found herself alone before tumbling down the track with disbelief etched on her face.

Back on the medal podium for the third and final time, she cried.

“And that was not the medal,” she said. “It’s because I’m finished. It was a relief. I think I’m a little crazy?

On the last night of athletics at the Olympics, Hassan unleashed a fierce kick in the 10,000-meter bell lap to part ways with Kalkidan Gezahegne of Bahrain, who finished second, and Letesenbet Gidey of Ethiopia, who drifted into third place. Gidey holds the world record for the event, but even she was no match for Hassan, who finished in 29 minutes 55.32 seconds.

“I trained every moment thinking about this for four years,” she said.

Hassan, 28, was born in Ethiopia but arrived in the Netherlands as a refugee in 2008. She is now in the conversation as one of the greatest long distance runners in Olympic history.

She won gold in the 5,000 meters on Monday, then bronze in the 1,500 meters on Friday. She had tried to pick up the pace in this race before faltering late as Faith Kipyegon of Kenya defended her 2016 Olympics title. Afterwards, Hassan said she was happy.

That she even attempted to win a medal in three grueling events was considered quite absurd, even among her fellow athletes. Emily Sisson of the United States, who finished 10th in the 10,000 meters, said she was “shocked” when she found out Hassan had competed in all three races.

“It’s on another level,” Sisson said.

For her part, Hassan said she spent a week and a half struggling with an inner monologue characterized by equal parts of trust and doubt.

“It’s possible,” she said to herself. But then, just as quickly, she would hear herself say, “No, that’s not possible. She was fueled by one particular emotion.

“I think I’m scared enough,” she said. “I think fear makes you strong.”

She also flirted with disaster. She twisted a muscle in her leg as she warmed up for her 5,000-meter qualifying race, an injury that her management team said bothered her throughout the Olympics. She later fell in her first round of the 1500 – on the turn of the bell, no less. But in a sign of more strength to come, she got up and chased the rest of the pack to win and move on.

She was “stressed out every day,” she said. And tired. So very tired. On Saturday, she was relieved to have only one race left to focus on. In a way, his mind was clean for the 10,000 meters. It was showing.

The race turned into a chore of attrition in hot and humid conditions. Three runners retired early. The leading pack then went to five, then four. As the carnage unfolded, Hassan fell back behind Gidey and Hellen Obiri of Kenya, who was just ahead of Gezahegne in fourth position. Eventually, Obiri succumbed to the elements and the tempo, and also gave up on the back.

In the first corner of the last lap, Hassan climbed onto Gidey’s right shoulder and sprinted – straight into history.