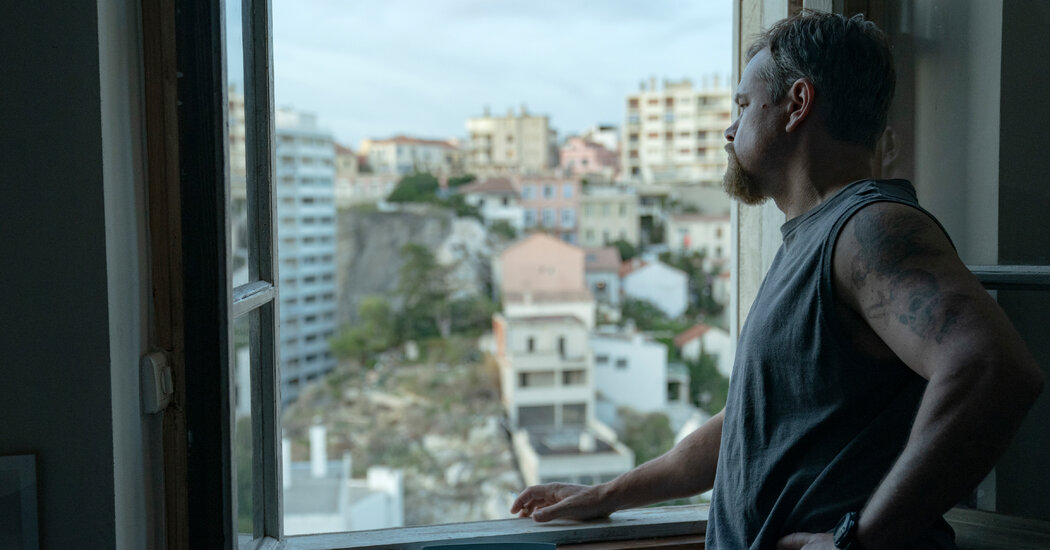 A truism about American films is that when they want to say something about the United States – something big, deep, or meaningful – they usually do well. There are different reasons for this shyness, the most obvious being the fear of sensitive public sensibilities. And so ostensibly political stories rarely take partisan positions, and films like the heavily serious “Stillwater” sink under the weight of their good intentions.

The latest from director Tom McCarthy (“Spotlight”), “Stillwater” stars Matt Damon as Bill Baker. It’s a narrative type familiar with the usual woes of late capitalism, including dead-end concerts, family agonies, hurt masculinity. He also has a touch of Hollywood-style exoticism: he comes from Oklahoma. A recovering drug addict, Bill now rocks between swinging a hammer and taking a knee for Jesus. Proud, tough, alone, with a rope of violence that trembles under his impassiveness, he lives in a dismal little house and leads a dismal little life. He doesn’t say much, but he’s got a real case of the white man’s blues.

He also has a burden in the form of a daughter, Allison (a misinterpreted Abigail Breslin), who is serving time in a Marseille prison, after being convicted of brutally killing his girlfriend. The story, conceived by McCarthy (he shares screenplay credit with several others), is inspired by that of Amanda Knox, an American student in Italy, who was convicted of a murder in 2007, a case that has become an international scandal. Knox’s conviction was later overturned and she returned to the United States, immortalized in sordid headlines, books, documentaries and a laughable 2015 potboiler with Kate Beckinsale.

Like this film, which focuses on the sins of a vampiric and thrill-seeking medium, “Stillwater” is not interested in the details of the Knox affair but in its usefulness for moral education. Shortly after it opens, and after a tour of Bill’s natural habitat – with its industrial Gothic background and lonely junk food dinners – he visits Allison, a trip he has made on several occasions. This time he stays. Allison believes she has a lead that will prove her innocence, which sends her father down a rabbit hole of investigation and, for a while, quickens the film’s pulse.

McCarthy is not an intuitive or innovative filmmaker, and like many actors-turned-directors, he’s more adept at working with performers than at telling a story visually. Shot by Masanobu Takayanagi, “Stillwater” looks and moves really well – it’s solid, professional – and Marseille, with its sun and pitch black, pulls its atmospheric weight as Bill maps the city, trying to hunt down clues and bad guys. Underutilized French Algerian actor Moussa Maaskri, who also earns his salary, plays one of those cunning and weary private detectives of the world who, like the viewer, understands things long before Bill does.

A lot is happening, including an abrupt and unconvincing relationship with French stage actress, Virginie (the electric Camille Cottin, from the Netflix show “Call My Agent!”). The character is a fantasy, an angel serving a hot body and a cute boy (Lilou Siauvaud); among her many implausible attributes, she is not embarrassed by Bill’s inability to speak French. But Cottin, a charismatic performer whose feverish intensity is his own gravitational force, keeps you easily engaged and curious. She gives her character juice and scenes a palpable load, a relief considering Bill’s lead reserve.

There is little joy in Bill’s life; the problem is, there isn’t a lot of personality either. It’s clear Damon and McCarthy have thought through this man in every detail, from Bill’s plaid shirts to his tight gait. The character looks like he hasn’t moved his bowels for weeks; on the contrary, he feels overworked, the product of too much conceptualization and not enough feelings, identifiable humanity or sharp ideas. And because Bill doesn’t speak much, much of him has to emerge through his actions and his tight physique, downcast eyes and part of his head obscured by a baseball cap that hangs over them like a visor.

It’s, as people like to say, a committed performance, but it’s also a frustrating and flat performance. Less of character than of vanity, Bill is not a special father and an anxious American abroad; it is a symbol. McCarthy nods at the start of the first scene in Oklahoma with the image of Bill precisely framed in the center of a window of a house he is helping to demolish. A tornado ravaged the area, leveling everything. When Bill stops to look around, inspecting the damage, the camera films the weeping survivors, the rubble and the ruins. It’s a good setup, full of potential, but as the story unfolds it becomes evident that this isn’t just a disaster, natural or otherwise. It is an omen.

Like “Nomadland” and many Sundance films, “Stillwater” takes on the classic figure of the American stoic, the robust individualist whose autonomy has become a trap, a dead end, and – if all the narrative parts are consistent – a tragedy . And like “Nomadland,” “Stillwater” tries to say something about the United States (“Ya Got Trouble,” as Music Man sings it) without turning off the audience by calling out specific names or advancing an ideological stance. Times are tough, Americans too (at least in the movies). They are silent, soldier, squint at the sun and the void. Bad things happen and it’s someone’s fault, but it’s all so vague.