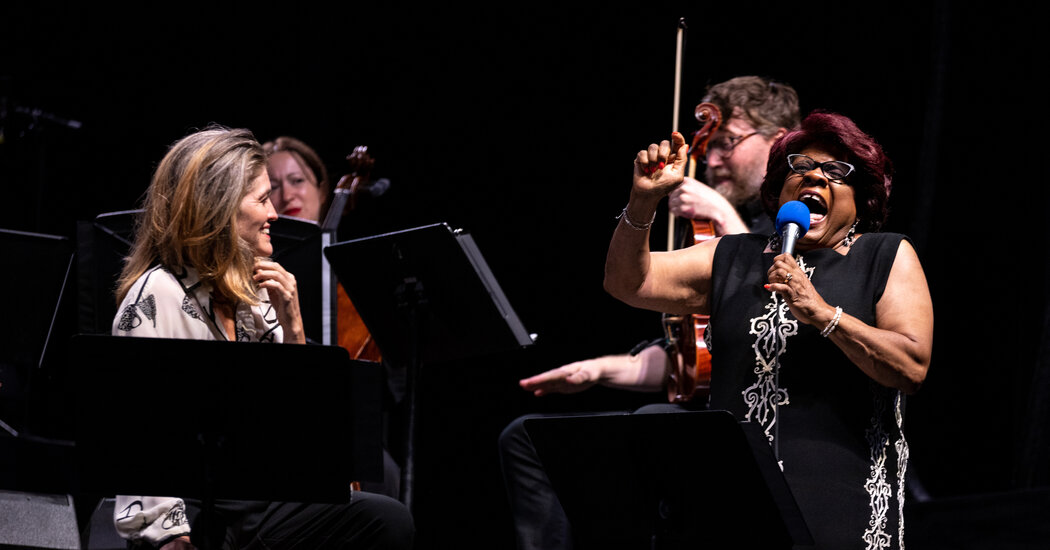 ‘The Most Happy Fella,’ Sliced, Diced and Not Very Happy

RED HOOK, NY – It was helpful to remember while watching “Most Happy in Concert,” the bizarre and fascinating 75-minute cantata that just finished a run here on Saturday night, that the carefully cut lawn of Montgomery Place, the great Hudson The river estate where the show was presented doesn’t look much like the vineyards of Napa Valley. This is where “The Most Happy Fella” takes place, Frank Loesser’s 1956 musical on which the concert was based.

But yet I tried to convince myself that despite their enormous differences, the two works, like the two places, could both be beautiful, my ear told me no. The original is a touching achievement; the concert only sucks his blood.

To be fair, “Most Happy in Concert” is really a work in progress, easy to respond to but hard to assess. Originally slated for staging as part of the Bard SummerScape series in 2020, following workshops dating back to 2018, it was postponed by the pandemic and emerged from audiences for this three-night stunt in distorted form, fully orchestrated but without setting, costumes or movement. Even with those caveats, and with a relatively high tolerance for tinkering with classic musicals, I felt like Daniel Fish, who conceived and directed the adaptation, had yet to come up with a compelling case on this. that was worth it.

We could forgive Fish for heaving a sigh over there right now. The same criticism has been leveled at his SummerScape production of “Oklahoma!” In 2015, although it became a hit at Brooklyn’s St. Ann’s Warehouse three years later and, after moving to Broadway, won the 2019 Tony Award for Best Cover of a Musical. This adaptation placed the Rodgers and Hammerstein classic in a sort of community party hall, complete with streamers, banjos, and chili in the intermission. You could hardly have missed – and many critics were captivated by – the way this new light seemed to reveal the bones of the artwork like an x-ray announcing bad news.

“The Most Happy Fella” is a different animal. Although some consider it an opera, Loesser preferred to call it “a musical with a lot of music” – worth nearly three glorious hours. Anything he could turn into a song he did, brilliantly absorbing the story of Tony, a Sicilian immigrant grape farmer, and Rosabella, the much younger bride he cheated on, into tunes. , bounces, recitatives and choruses. The result is a long, difficult and, at this stage, almost prohibitive spectacle to put on; with its echoes and complex leitmotifs, it is also difficult to cut. Yet the golden age of Broadway produced a few more exhilarating works, and some of us will go anywhere to find them.

This seems to be what Fish did as well.

Work with his “Oklahoma!” collaborators Daniel Kluger and Nathan Koci, Fish must have realized that he could not preserve the integrity of the score or the story on the big screen in a small-scale production. His solution, which displeased purists, but also many impurists, was to completely suppress the dialogue and run the music through a high-speed shredder.

Many large numbers were lost in the process; the climax “My heart is so full of you”, for example, emerged as a few curls of melody scattering through the night air. The songs or song particles that survived this almost random process were attributed to seven performers – all female or non-binary and sullenly seated on stools – in kaleidoscopic rework that prevented the creation of any characterization. sustained. Everyone played anyone, and therefore no one.

If you did not know the plot, then you would be unable to discern it here. The melodies were put back to mid-sentence, the songs were sung out of order or sampled briefly before crashing into others. On the rare occasion that Fish allowed a number to be played intact, it was, as he might have expected, a revelation, like the moon breaking through the clouds. Yet even that seemed hit and miss. It made sense to let the lovely soprano Mikaela Bennett sing all of “Somebody, Somewhere”, Rosabella’s painful introductory number, but in another extended solo, the belt Tina Fabrique put on an R&B show with “Young People,” at originally a minor minuet.

I don’t mind that Loesser’s Napa soundscape, with its tarantella and Italian-style arioso, was ditched in favor of arrangements and orchestrations for a 12-player ensemble who favored smoky bebop, la sour jazz fusion and – was that sarcastic? – something you may have heard on an Andy Williams TV special. (To listen to Don Walker’s spectacular original orchestrations, I just need to click play on the original cast album.) And I enjoyed discovering new ideas inside many songs, even though the formerly festive and fast “Abbondanza” is now had all the liveliness of a funeral march.

But unlike “Oklahoma! Fish’s – in which the dialogue and score were left untouched – “Most Happy in Concert” works so hard to be new for the sake of novelty that it feels like an open season on the musical. In a developing work, this arrogance is understandable and perhaps even necessary; I can’t wait to see “Most Happy” again. Hopefully when I do, I’ll be able to see what Fish is trying to develop him into.

It’s not like the original needs to be “corrected” for dramatic or political reasons, like so many golden age musicals. And although it was nice to hear the sopranos and violas sing a score that usually includes tenors, baritones and basses, it must be said that few singers, among which Jules Latimer, Erin Markey, April Matthis, Mallory Portnoy and Mary Testa, made musicality a priority; anxiety and anomie were the top notes. Their sound was at times, I suppose on purpose, harsh and lacking in beauty.

And yet, the emotional world of the show is often harsh and unsightly too. Tony, for all his cordiality, spent his life believing he was too simple and stupid to get married. Rosabella – who isn’t even her real name – believes that as a poor woman she has no choice but to go with any man who might ask.

These feelings, Fish seem to ask, are not theirs alone. Separating emotions from the story of individual characters and even from the plot can be a way of showing that they exist universally, like a sort of magma bubbling up beneath us all.

Perhaps it is better, then, to think of “Most Happy in Concert” as an abstract painting that creates meaning through a collision of shapes. Which doesn’t mean it doesn’t have a theme. The play on words in the title of the evening lets you know that you are listening to the cries (sometimes magnificent, sometimes ugly) of people who are “happier” not alone but “in concert”: who thirst for love but don’t know, or are too afraid to ask.

Of course, that was the theme of the show in the first place.