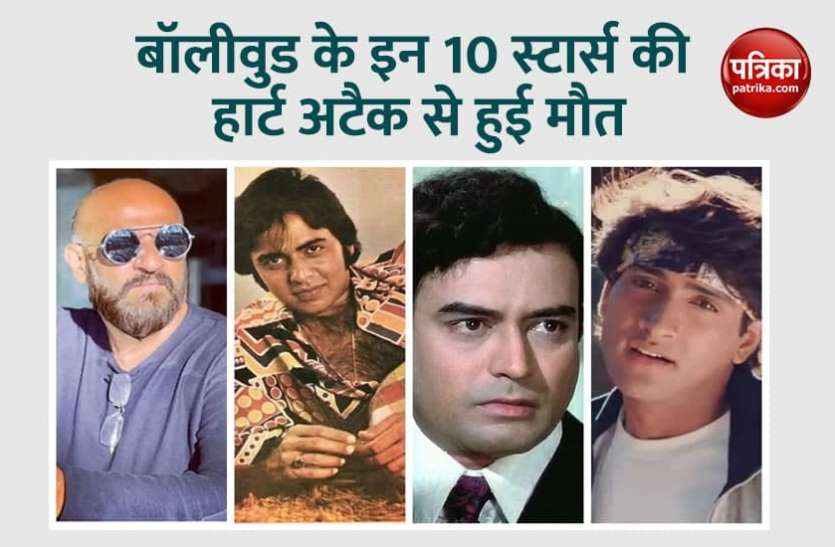 These 10 Bollywood stars died of heart attack, one died during sleep

New Delhi. During the Corona period, we have lost many big stars forever. Out of which some people died due to cancer, some due to corona infection. More recently, Mandira Bedi’s husband Raj Kaushal also passed away on June 30. The entire Bollywood is in shock due to the demise of producer-director Raj Kaushal. Raj Kaushal died of a heart attack. By the way, Raj Kaushal is not the only member of the Bollywood world who has died of a sudden heart attack. There are many such artists who lost their lives due to heart attack at a very young age. Today we tell about them…

The mountain of sorrows on the Kapoor family in Bollywood is broken at that time. When after the famous actor Rishi Kapoor, his younger brother Rajiv Kapoor died at the age of 58. Rajiv Kapoor breathed his last on 9 February due to a heart attack. After the heart attack, Ranbir Kapoor took him to a hospital in Chembur in a hurry but doctors declared him dead there.

Famous choreographer Saroj Khan also passed away on 3 July 2020 due to cardiac arrest. She was 71 years old.

Actor Inder Kumar, who worked with Salman Khan in the film ‘Wanted’, left the world at a very young age. He died on 4 July 2017 at the age of 43 due to a heart attack while sleeping.

Sanjeev Kumar, who was a famous Bollywood actor, had made a place in everyone’s heart with his special performance in the film Sholay, the news of his sudden death on 6 November 1985 shocked the whole country. During that time he was only 48 years old. It is said that most of the people in his family had died in his youth, due to which Sanjeev Kumar was always afraid of heart attack.

Like Sanjeev Kumar, the Bollywood industry also lost actor Vinod Mehra at a very young age. He was only 45 years old when Vinod Mehra died due to a heart attack.

Kishore Kumar, the most famous actor and singer of Hindi cinema, ruled the film industry for years. But he died on 13 October 1987 due to sudden heart attack.

When 65-year-old Farooq Sheikh had gone to Dubai for New Year’s holidays with his family, he had a sudden heart attack there. Farooq Sheikh passed away on 28 December 2013. He was handed over to him on 30 December in Mumbai.

Similarly, the trip to London proved to be the last journey for Devanand, an evergreen looking actor. Devanand went to London for his medical checkup. On 3 December 2011, he suffered a heart attack and due to this he died.

Veteran actress Reema Lagoo, known as Salman Khan’s mother in Bollywood films, passed away on 18 May 2017. Reema Lagoo had returned home after completing the shooting of her serial, when she had a heart attack late on 18 May. And the news of his death came. This news had surprised everyone.

Veteran actor Om Puri died of a heart attack at the age of 66. Om Puri had a heart attack on 6 January 2017. He was found dead in his house on the floor. It is said that he had realized his death long ago.