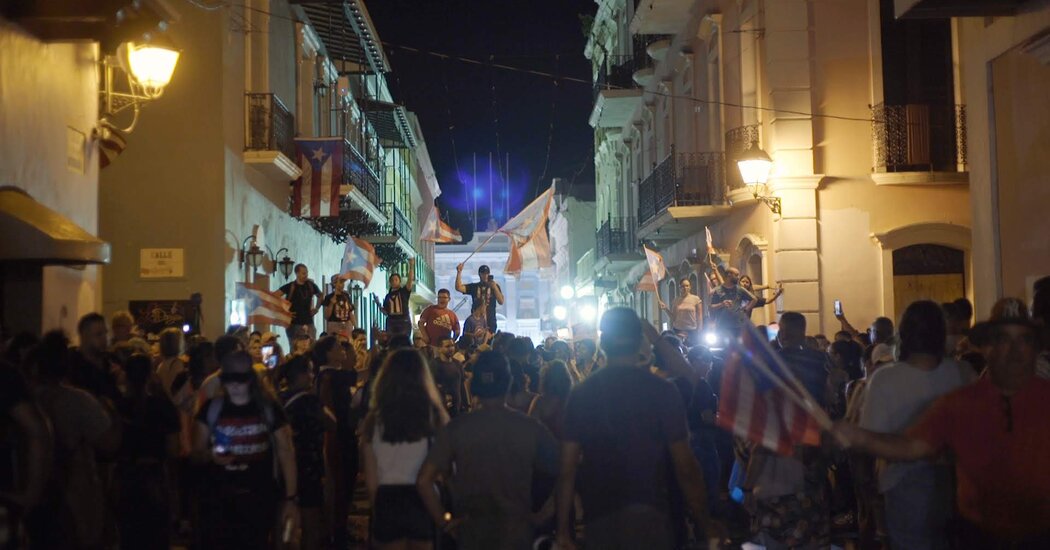 It is dark in Puerto Rico. A dembow beat, the rhythmic basis of reggaeton, pulsates, cutting through thick air. A man glistens with sweat, an amber light bathing the droplets on his shoulders as he gently rubs against his dance partner. The crowd roars as a beloved reggaeton anthem echoes in the distance.

To the rhythm of the familiar island accent, a voice spoke: “I don’t want to spend my whole life fighting.

This scene comes towards the end of Cecilia Aldarondo’s documentary “Landfall”. It is a moment of daily pleasure, but which also faces the psychic weight of the political struggle. It captures what it still means to accept Hurricane Maria and the 2019 uprising against government corruption. It is an image of warmth and intimacy, but one that refuses to put aside the difficult feelings that accompanied the last years of Puerto Rican life.

This approach distinguishes “Landfall” and “Stateless”, two new films about Puerto Rico and the Dominican Republic in PBS’s POV program, from numerous documentaries produced for audiences in the United States. Caribbean narratives are rarely accorded this kind of complexity on screen. In the West, the West Indies are seen as a place of misery and disorder, victimization and depravity. In this reductive vision, Puerto Ricans are the helpless victims of Hurricane Maria, while Dominicans and Haitians are enemies locked in a never-ending historic battle.

These views flatten complex human realities into rudimentary stereotypes, linking the inhabitants of these islands to their colonial and racial traumas. But “Landfall” and “Stateless” challenge these notions. The films lean towards ambiguity and uncertainty, resisting a binary vision of pure abjection or simple victory. “Landfall” is prismatic, without a linear structure; it features multiple characters, creating an impressionistic composite of a community giving meaning to political instability and natural disasters. “Stateless” features three main characters, but opposes the demand for a neat story about the triumph of the human spirit.

Both films exist in a documentary landscape that tends to lack hope. Many of these films, especially those about non-Westerners and non-whites aimed at American audiences, follow a common thread: an outsider from a difficult background faces a social problem and, by the sheer force of his will, overcomes adversity. Think “The White Helmets,” the Oscar-winning short film that follows volunteer rescuers during the Syrian Civil War. These types of movies tend to level the superimposed realities into digestible encounters and open up terrific social issues to easy resolutions.

To disrupt this formula, “Landfall” assembles vignettes from all over Puerto Rico. In the town of Bartolo, locals band together and turn a school into a common living space, where meals and household items are distributed to residents after help from the government or charities fails to arrive. Cryptocurrency entrepreneurs from the Americas arrive in Mayagüez in search of profit, given the territory’s status as a tax haven.

Throughout, Puerto Ricans have reiterated their fears about the shortage of food and gas after spending hours in line. There is pain, but also mistrust: crowds have invaded the streets of Old San Juan chanting in Spanish “Fight, yes! Give up, no! at the height of the 2019 uprising against political corruption and government neglect, demanding the resignation of Ricardo Rosselló, then governor. One woman spoke of the pressure to quickly overcome the suffering caused by the hurricane: “We are trying to erase the bad things, to put them aside. But I think we have to see them again, ”she said. “We cannot forget that we were left without resources.” There are also moments of joy: shots of friends playing dominoes on the beach, shouting “¡Pa’l carajo María!” (“Vis María!”), Even though they remember a neighbor who remains without electricity.

“Landfall” does not linger in discouragement or the ability to endure. Towards the end, celebratory crowds gather in the streets after the governor’s resignation, spurred by days of protests. Over footage of euphoric protesters, a series of sharp Puerto Rican voiceovers resonate: “I feel happy about this victory,” said one. “I’m not ready to celebrate yet,” said another. “I don’t know if we are at the beginning or at the halfway point”, reflects a third. It is this multiplicity that allows “Landfall” to excel. Without presenting a straightforward account of recovery after Maria, he considers both the untreated grief and the sense of relief that so many people carry with them.

“Stateless”, directed by Michèle Stephenson, focuses on three characters: a lawyer, Rosa Iris Diendomi Álvarez; his stateless cousin, Juan Teofilo Murat; and Dominican ultra-nationalist Gladys Feliz Pimentel. The film follows them in the wake of a landmark 2013 court ruling that removed citizenship from Dominicans of Haitian descent born after June 1929. The ruling left thousands without access to government benefits and forced many people to return to Haiti, where they had no stateless papers.

Diendomi Álvarez offers legal aid to neighbors, helping them register with the government so that they can access social services. Murat tells how he was forced to return to Haiti and abandon his two children. Feliz Pimentel expresses an anti-immigrant sentiment that will be familiar to the American public, calling Haitians rapists and criminals and demanding the construction of a border wall.

It’s hard to watch. Feliz Pimentel is flippant, sometimes nonchalant about his extremist views, and the contradictions are immediately obvious: she says that “Haitians have always lived in brotherhood with Dominicans” and that they “deserve a better opportunity” – only one that is not in the Dominican Republic. Republic. Murat’s journey is as heartbreaking as it is enraging; in a tearful shot, he recounts how difficult it is to be separated from his children, missing the formative moments of their youth. Diendomi Álvarez is always daring: she tries to help her cousin with her status, a hidden camera following their odyssey through the labyrinthine bureaucracy of the government. She even launches a self-funded campaign in Congress.

Much of the film is observational and insightful, but there are also moments of outrage. An interview with the Central Election Commission, the agency responsible for Dominican civil status, exposes entrenched neglect in the political system and offers little recourse for Murat. But there’s also the joy: the thrill Diendomi Álvarez feels on her first visit to Haiti, her father’s homeland, and the poignant battle she wears as she campaigns, preaching change at the local level. . Throughout the film, the film attempts to relate the problem of the anti-Haitian to the history of colonialism and dictatorship on the island, avoiding stereotypes.

At the end of “Stateless”, the fates of Diendomi Álvarez and Murat remain unclear. There is no fantasy of resilience or suggestion that the success of one individual will dismantle the injustices of the whole system. There are moments of upliftment, but also great attention to the difficulties that persist for so many as a result of denationalization.

By showing the people of Puerto Rico and the Dominican Republic as nuanced figures, these films imagine more than just an auspicious future or a devastating present for the Caribbean. They refuse to pathologize and reduce entire groups of people. To quote an indelible phrase from the Martinican philosopher Édouard Glissant, they “agree not to be a single being”.