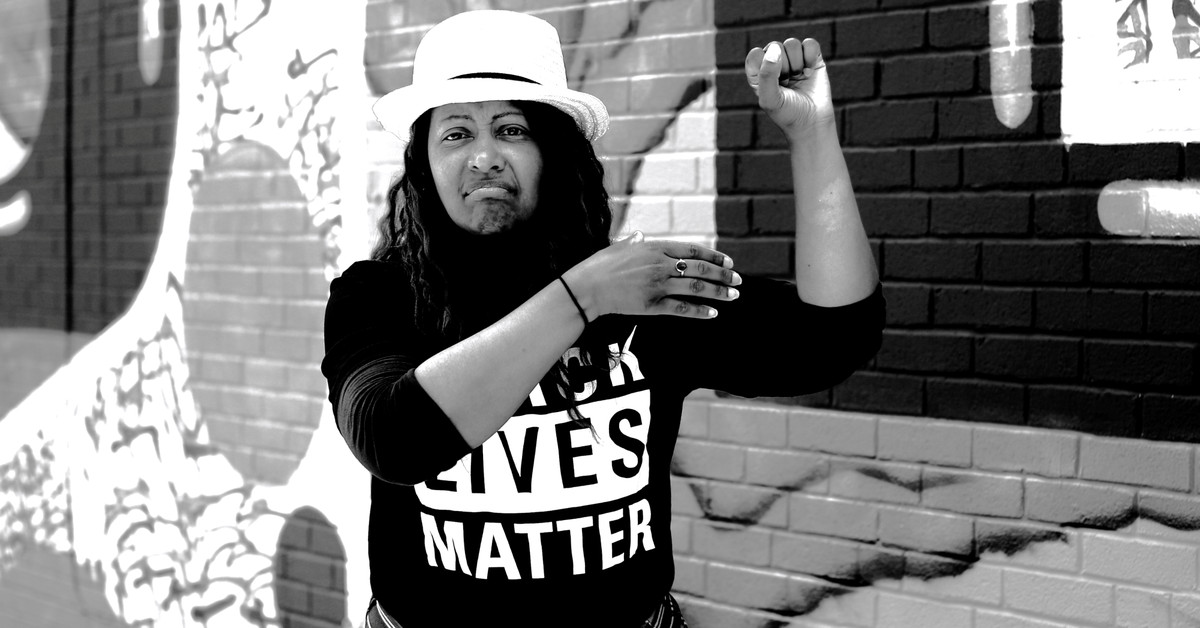 Filmmaker Emmai Alaquiva of Pittsburgh wanted to talk to his 8-year-old daughter about the racial climate in the US, but was concerned that at her age, she might not be able to fully grasp the issues.

“I told her the name ‘George Floyd’ and we talked about what Black Lives Matter means,” he says. “I sort of gave her the Cliffs Notes version, to give her some inspiration.”

His daughter surprised him, however, and came back to him with a question: “She said, ‘hey, Dad, how come there’s no people doing sign language or ASL in your photos and videos?’ It was a great point, we weren’t.” He says he and his daughter take ASL classes together, part of his mission to help her learn to express herself in different mediums.

Over the next few days Alaquiva reached out to professionals in the deaf and hard-of-hearing community including freelance sign language interpreter Amy Crawford, Danielle Filip of Pittsburgh-area Sign Language Interpreting Professionals, and Greg Pollock, an accessibility officer at a local bank, to be consultants on the script for the video he wanted to do, featuring a message in American Sign Language.

“I wanted to make sure the messaging was clear, and that we weren’t appropriating anything from the community,” Alaquiva said.

The result is “Unspeakable,” a public service announcement featuring members of the deaf community: “Although we may be deaf, we can hear the world loud and clear,” the group signs.

“It is my hope that ‘Unspeakable’ brings attention to the basic human right of communication access as a thread which connects us all,” Filip said.

The nuances of communicating in sign language were important to get right in the video, Alaquiva said: for instance, the word “black” referring to the color can be signed with one finger pointed out in the ASL 1 handshape moving horizontally across the forehead. But when referring to a Black person, the sign uses four fingers pressed together in the ASL “b” handshape moving horizontally across the forehead, and is generally reserved for use by Black people, Alaquiva said.

Participating in public rallies is often challenging for deaf and hard-of-hearing people, especially in large crowds with many people wearing face masks that cover their mouths. Activists have worked with the National Alliance of Multicultural Disabled Advocates to push for the #BlackDisabledLivesMatter efforts, to spotlight these challenges, as Teen Vogue columnist Sarah Kim reported. They also seek to call attention to the number of police violence victims who had disabilities.

Alaquiva said he hopes the PSA is inspiration for others involved in protest movements to be more inclusive, not necessarily just for people who are deaf or hard of hearing, but anyone with a disability. “It’s not our job to just do something then go about our business,” he said, adding he and his production team built a website with additional resources.

“There’s a photo I took at a protest in Oakland and the person’s sign said ‘I’m sorry I’m late, I had a lot to learn.’ That can apply to any movement you want to be a part of. Whether you’re on time or late, you gotta show up.”

READ Also  Even LinkedIn is making a Clubhouse clone