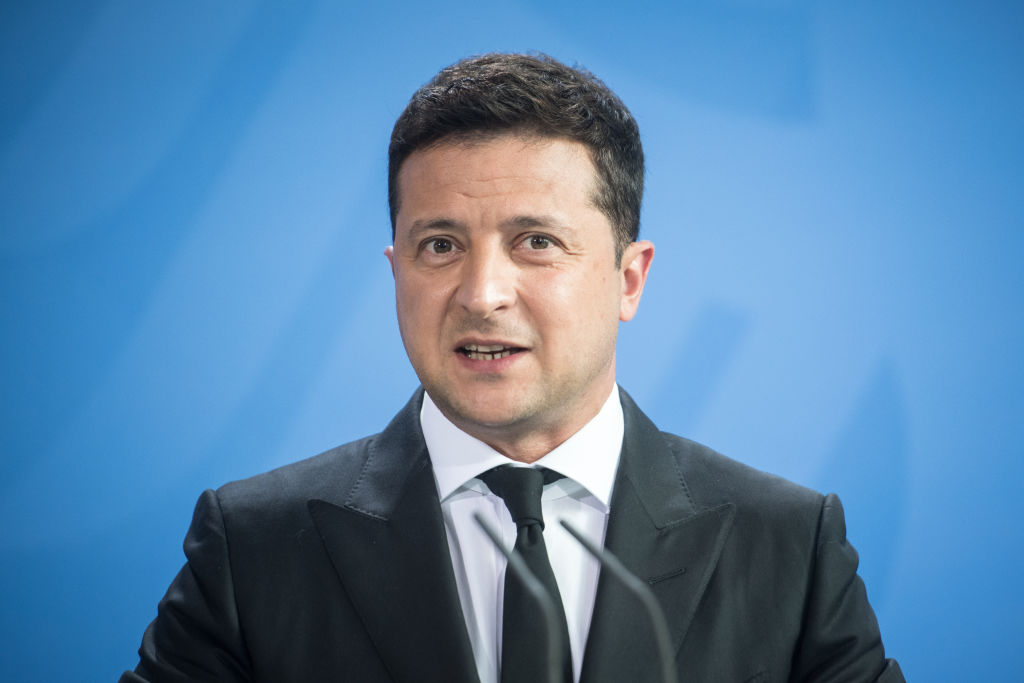 What is Volodymyr Zelenskyy’s Net Worth and Salary?

According to his official financial disclosure released in 2018, at that point in time Volodymyr controlled assets worth 37 million hryvnias. At that point that amount was worth the equivalent of $1.5 million. At other times that amount has been worth closer to $1.2 million.

Before becoming a politician he was an actor who starred as the fictional Ukrainian president on the popular television series “Servant of the People,” which was produced by his production company Kvartal 95; he also starred in numerous films, including the “Love in the Big City” franchise. In 2021, Zelenskyy and his administration faced escalating geopolitical tensions with Russia, which culminated in the Russian invasion of his country in February of 2022.

Volodymyr Zelenskyy was born on January 25, 1978 in Kryvyi Rih, Soviet Ukraine to Jewish parents Oleksandr and Rymma. Growing up, he lived for a while in the Mongolian city of Erdenet, where his father had a job. When he was a teenager, Zelenskyy passed the Test of English as a Foreign Language and earned an education grant to study in Israel; however, his father forbade him from going. He went on to obtain his law degree from the Kryvyi Rih Institute of Economics.

When he was 17, Zelenskyy joined the KVN comedy competition, and was invited to become part of the team Zaporizhia-Kryvyi Rih-Transit. As part of the team, he won the KVN Major League in 1997. That same year, Zelenskyy founded and ran the Kvartal 95 team, which evolved into a successful comedy group. From 1998 to 2003, Kvartal 95 performed in the KVN Major League and toured extensively throughout post-Soviet nations. Subsequently, Zelenskyy began producing television shows through the company.

Zelenskyy landed one of his most popular roles in 2015, when he began starring on the satirical television series “Servant of the People” as Vasyl Petrovych Holoborodko, a high school history teacher who is elected president of Ukraine when a video of him inveighing against Ukrainian governmental corruption goes viral. Zelenskyy also appeared on the comedy series “Svaty,” which was banned in his country for two years.

Beginning on New Year’s Eve in 2018, Zelenskyy led an almost entirely virtual presidential campaign. He went on to win the first round of elections in March before winning the run-off in April. During his campaign, he continued to tour with Kvartal 95. Finally, on April 21, 2019, he was elected president of Ukraine, unseating incumbent Petro Poroshenko.

As the Ukrainian president, Zelenskyy has been a notable champion of e-government. He has also been vocal in promoting unity between the Ukrainian- and Russia-speaking parts of his nation. Zelenskyy is known to employ a communication style that emphasizes the use of social media. Among his accomplishments, he oversaw the elimination of legal immunity for members of Ukraine’s parliament, and worked to curb corruption in government. Zelenskyy has also fought to end the war in Donbas while resolving that area’s Russia-sponsored separatist movement. However, critics of Zelenskyy claim that he has tried to centralize authority by removing power from Ukrainian oligarchs.

Among his political positions, Zelenskyy has sought to develop the Ukrainian economy to attract investment. In terms of foreign policy, he has advocated for Ukraine to become a member of NATO and the EU. On the domestic front, Zelenskyy supports the free distribution of medical marijuana; free abortions; and the legalization of gambling and prostitution. He has defended many other freedoms in Ukraine, including the freedom for artists to express their political attitudes.

In September of 2019, it was found that Donald Trump had engaged in a quid pro quo with Zelenskyy, in which he tried to block payment of a congressionally mandated military aid package to Ukraine in order to pressure Zelenskyy to dig up dirt on Trump’s political opponent, Joe Biden. This event led to the Trump-Ukraine scandal and the first impeach of Trump.

In the spring of 2021, the Russian military began to amass around the border of Ukraine. Later in the year, Zelenskyy accused both Russia and Ukrainian oligarch Rinat Akhmetov of planning to overthrow his government, and made a call for preemptive action.

On the morning of February 24, 2022, Vladimir Putin announced that Russia was officially beginning a “military operation” in the Donbas area of Ukraine. Subsequently, Russian missiles were launched at Ukrainian military targets, causing Zelenskyy to declare martial law. The next day, civilian sites in Ukraine were also being attacked. Rather than evacuate, Zelenskyy chose to stay in the besieged capital in allegiance with his country’s defense forces. During this tumultuous period of war, he achieved global recognition for his leadership, and has even been compared to British Prime Minister Winston Churchill.

In 2003, Zelenskyy wed screenwriter Olena Kiyashko, whom he had met in school. Together, the couple has a daughter named Oleksandra and a son named Kyrylo. Their daughter appeared in Zelenskyy’s 2014 film “8 New Dates,” and later participated on the television program “The Comedy Comet Company Comedy’s Kids.”