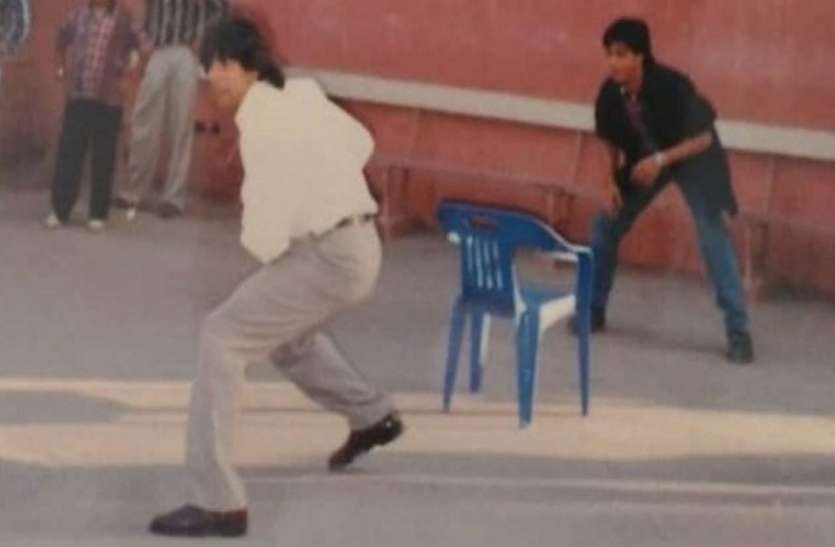 New Delhi. Shahrukh Khan, who is called the King of Bollywood, is ruling the industry today. His films are well-liked. Today, even though Shahrukh Khan’s films may not have that much craze at the box office, but in the 90s every film of his proved to be a blockbuster. He gave many superhit films in that time. One of them is the film ‘Dil To Pagal Hai’. Shahrukh Khan was in the lead role in this film. Madhuri Dixit and Karisma Kapoor were also in important roles with him. At the same time, Akshay Kumar had a special appearance.

Also read: Amitabh Bachchan forced the knot in his shirt, told the whole story behind it

old picture of shahrukh and akshay goes viral
Now a year old picture of Shahrukh Khan and Akshay Kumar has surfaced. This picture is of his ‘Dil To Pagal Hai’. Shahrukh and Akshay are looking quite young in this years old picture. In the photo, Akshay Kumar is seen batting and Shahrukh Khan is keeping wickets behind him. A blue chair has been kept as a wicket. Akshay is wearing a white shirt and gray pants. At the same time, Shahrukh is seen in denim jeans and black shirt. This picture of both is now becoming quite viral on social media. This photo of both is no less than a treat for their fans.

movie became super hit
Let us tell you that the film ‘Dil To Pagal Hai’ was released in the year 1997. Shahrukh, Madhuri and Karisma played the roles of Rahul, Pooja and Nisha in the film. This film proved to be a superhit film of that year. People gave a lot of love to the film. Apart from this film, Shah Rukh and Akshay also worked together in Hey Baby.

funny answer of shahrukh khan
Once in an interview, Shahrukh Khan was asked whether he would work with Akshay. So Shahrukh gave a funny answer to this. He said, ‘What shall I call it? I don’t get up as early as them. His day starts early. When I start working, they are packing and going home. So they can work longer hours. Shahrukh further said, ‘Acting with Akshay will be fun. Both will not meet on the same set. They will be leaving and I will be coming. He will leave the set and I will come in. I would like to work with more like Akshay, but our timings will not match.’